The Festival of Dressage will get the perfect 10th anniversary present with news that dressage superstars, Charlotte Dujardin OBE and Valegro, are heading to Hartpury.

The Festival, which runs from July 8th to 12th, will be Charlotte and World Freestyle record holder Valegro’s only competition before they head to the European Championships in Aachen

The duo recently wowed the equestrian world with a superb victory at the Reem Acra FEI World Cup Final in Las Vegas. As part of their preparations for that competition, Valegro stepped out on the hydrotherapy treadmill at Hartpury’s Equine Therapy Centre.

Charlotte, who is based in Newent, and her wonderhorse have taken the world by storm since their last appearance at Hartpury in 2012, where they claimed the British Grand Prix Freestyle record with 90.650% just a month before being crowned Double Olympic Gold Medalists.

Since then they have amassed an impressive tally of medals including becoming 2014 Individual Grand Prix Special and Grand Prix Freestyle World Champions and winning Team Silver at the 2014 World Equestrian Games. They have also claimed three World Records.

Also competing at the Festival will be Hartpury’s Elite Dressage coach, Carl Hester MBE, who is also Charlotte and Valegro’s coach and mentor, having nurtured their talent from their very first competitions together.

Both Charlotte and Carl put in star turns at last year’s Festival, when record entries saw 300 riders from 19 nations compete in more than 40 dressage and para-dressage classes over five days.

Nearly 18,000 people watched the video of world number one Charlotte Dujardin lighting up the opening day’s proceedings as she rode a stunning test on Barolo to take top spot with 74.30% in the Corse Lawn Hotel FEI Prix St Georges.

London 2012 Olympic gold medallist, Carl, opened his winning account on the second day, riding Fine Time 13 in the Le Mieux Grand Prix. He also rode Nip Tuck to victory in the Smith and Williamson CDI Grand Prix and the pairing put in another impeccable performance to take the honours in the Cushionbed FEI CDI Grand Prix Special on the final day.

Phillip Cheetham, Assistant Equine Director at Hartpury College, said: “We are thrilled that Charlotte and Valegro are planning to compete at the Hartpury Festival of Dressage.

“The Festival always attracts a star-studded line-up of competitors from all over the world but, to have such a renowned ambassador for the sport at the college is very special.

“We’re also looking forward to Olympic champion, Carl Hester, returning to the Festival stage and I know everyone in the Hartpury community will be rooting for him. With Carl coaching our own elite dressage riders and having such a high profile locally, he’s always a hugely popular competitor.

“To have the chance to watch the very best in the world at our unique venue is an opportunity not to be missed.”

Now in its 10th year, the Saturday Gala evening performance remains the highlight of the week, with the Superflex CDI3* Grand Prix Freestyle affording such previous winners as Richard Davison, Maria Eilberg and Charlotte Dujardin.

Hospitality options are available to include champagne reception and three-course meal overlooking the Hartpury Arena. Please visit www.hartpury.ac.uk/dressage to book and for more information. 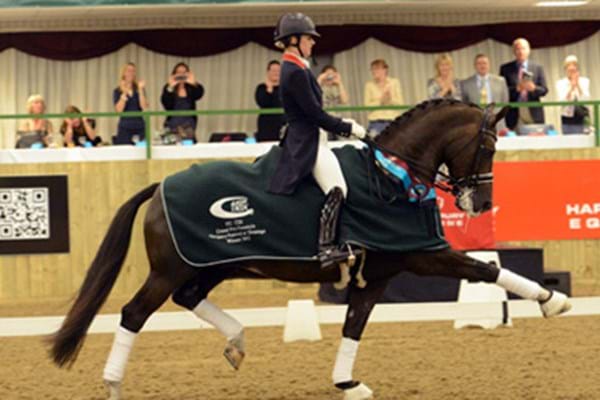