Hartpury’s golfers continued their strong form this season after five students represented Gloucestershire, sweeping aside the competition at the South West Schools Golf Championship on Monday (May 26th).

Held at Hartpury’s home course of Tewkesbury Park, all five played a big role in securing team honours in both the boys and girls competition as they saw off four other teams to finish atop the leaderboard and retain the title for a second successive year.

A Hartpury trio of Alex Chalk, Joe Harvey and Alex Ireland formed half of the boys team and helped to fire Gloucestershire to a seven-shot victory over second placed Hampshire after 36 holes, while the duo of Tara Rodenhurst and Victoria Wakeley-Jones were joined by one other Gloucestershire representative to steer the girls’ team to a six-shot triumph ahead of Devon.

The event also served as an individual qualifier for the national finals with the top 10 boys and the top five girls advancing through to the showpiece event at Peterborough Milton Golf Club, Cambridgeshire, in June.

And the whole Hartpury contingent managed to secure their finals berth with Chalk finishing in second position after shooting a one over par score after 36 holes to leave him just a single stroke behind the eventual winner, while Ireland and Harvey finished in seventh and eighth respectively.

Rodenhurst, like Chalk, finished in second place after a 36-hole score of eight over par while Wakeley-Jones finished just two places behind in fourth.

This performance followed up another strong outing a couple of weeks ago when Hartpury finished in second position at the Intercollegiate Tour (ICT) National Finals.

The college came up against 11 other teams in the three-round event at St Annes Old Links Golf Club, Lytham St Annes, and finished runners-up to an extremely strong Balby Academy of Sport by 11 shots in the gross division.

In an 85-strong field, Hartpury golfers Tom Davies and (Alex) Chalk, both scratch handicappers, finished the 54-hole event in second and third position respectively with the latter finishing just one shot behind his team-mate’s level par score.

They were joined by (Joe) Harvey, (Alex) Ireland, Nick Ramshaw and Kobe Adams in the six-man team as they finished 39 strokes clear of third placed Myerscough College.

Earlier this month, Hartpury secured the team honours at the British Schools and Colleges Tour (BSCT) National Finals which included Harvey firing a course record five under par at The Dukes Golf Club at St Andrew’s on his way to the individual title.

Hartpury’s golf manager, Rich King, said: “It has been another positive showing from all golfers recently and these results are a reward for the hard work they have produced all year long. It’s great to see some of our golfers make an impact for the county and hopefully they can carry their form onto the finals in June.” 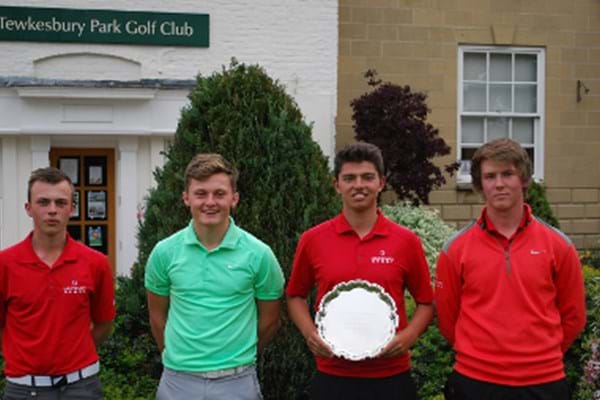