Gloucester-Hartpury’s girls quad turned the tables on Marlow Rowing Club as they battled to victory at the National Schools Regatta in Nottingham.

After losing out to Marlow at the Schools Head event in March, Hartpury took their revenge this time round to regain the national title they had first won back in 2013.

The crew welcomed back Alice Bowyer, who had missed the Schools Head through injury and only recently returned from injury, to take their first major win of the season and improve on last year’s bronze medal.

Hartpury’s Rowing Coach, Tom Pattichis, said “We’re delighted to have picked up another national title. The pressure was on after seeing Hartpury’s football, golf, rugby and netball teams all winning national titles this year and now with one in the bag we’re looking ahead to even more success in the coming events.”

Away from Nottingham, a group of Gloucester-Hartpury rowers, mostly made up of newcomers, were sent to Monmouth Regatta where they came away with five wins from six events.

Sam Cater picked up wins in the novice and Under-18s double sculls, partnered by Ollie Gibbons and Charlie White in the respective races. White also came out on top in the J18 single sculls event and Alexandra Watson scooped wins four and five in the women’s Under-18 and women’s novice single sculls events.

Watson, an A-level student, only began rowing in September of last year after being identified by the GB Rowing Start talent identification programme.

The rowers will now turn their attention to Henley Women’s Regatta and the Marlow Regatta towards the end of June and then the Henley Royal Regatta two weeks after. 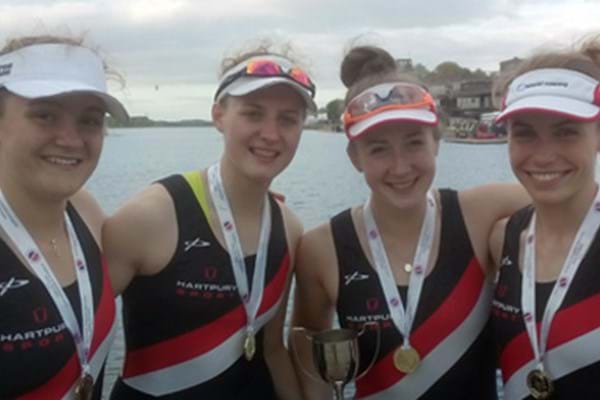