Hartpury rugby celebrated another hugely successful season packed with team and individual honours at the annual awards dinner at the home of Gloucester Rugby.

Players and coaches from Hartpury RFC and the BUCS university teams joined supporters and VIP guests, including guest speaker, World Cup referee Ed Morrison, for the event at Kingsholm.

Captain, Chris Fortey, handed the coveted RFC player of the season award to former Ireland Under-20s prop Des Merrey – a mainstay of the team that secured an impressive fifth place finish in their first season in National League One. The most improved player award went to back row Tom Macdonald, who is studying for a Foundation degree in Sports Performance at Hartpury.

The BUCS first XV player of the season award went to Italy Under-20s’ second row star Seb Negri, who only came to Hartpury College from South Africa in September 2014, when he started out on a Sports Business Management degree.

Although the university side missed out on retaining the BUCS Championship this season, losing out at the semi-final stage, they secured the BUCS Sevens title and will now represent England at the University Red Bull Sevens in Bath in September. They also secured a second place finish in BUCS Premier South A.

Ollie Walliker took the player of the season honours for the BUCS second team, who suffered a heartbreaking defeat to Exeter in the BUCS Trophy final, having battled back to send the game into extra-time. They finished second in Premier South B, losing out on the title by a solitary point.

For the BUCS thirds, player of the season went to Matt Davies - scorer of the opening try in their Men’s Conference Cup final triumph over local rivals University of Gloucestershire seconds. The exhilarating 34-33 victory was secured thanks to a stunning comeback by Hartpury, who scored a try in the last play of the game to take the game into extra-time. The thirds also finished nine points clear at the top of BUCS Western 2B.

Hartpury’s university women’s team had a hugely successful 2014-15 campaign. Only formed in September 2014, with many of the team having never played rugby before, they finished only two points off securing the BUCS Western 2B title. The women’s player of the season honours were shared between Emma Mundy and Hannah Hart.

Several of the university women’s players also starred for the new Gloucester-Hartpury women’s team, who claimed the National Junior Cup in their inaugural season.

Alan Martinovic, Hartpury’s Director of Rugby, said: “All of the university teams and the RFC have had a great deal to celebrate this season and it was fantastic to all come together to share that success.

“For the RFC to finish fifth in National League One in their first season in the division means we were the 26th placed club in the English leagues and the highest placed university side.

“That’s an incredible achievement but we’re equally proud of the vast array of players, both men and women, who have been selected for international teams and gone on to secure professional contracts this season.

“At Hartpury, we pride ourselves on supporting our students to be the best they can be and it’s hugely satisfying when they go on to achieve their dreams, both on and off the sports pitches.”

Martin Baber, who has recently retired as a long-serving governor of Hartpury College, and former Principal, Malcolm Wharton, were also honoured at the awards evening. They were presented with plaques to mark them becoming honorary presidents of Hartpury RFC by Principal, Russell Marchant, who also gave his thanks to Matt Bayliss, who is stepping down as Hartpury RFC’s commercial manager next season.

A gallery of photos from the evening can be found here 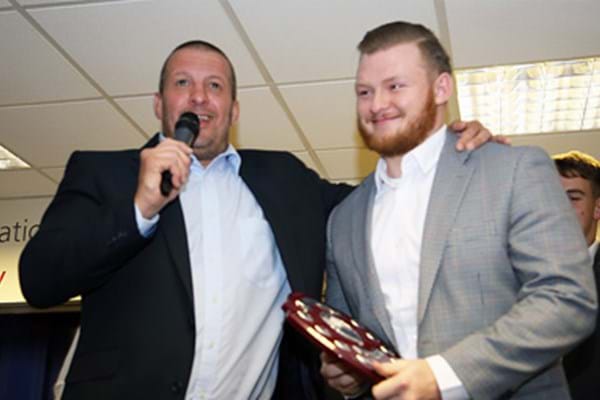