Three Hartpury A-level students are gearing up to complete major hiking and biking challenges this summer as they continue to step up their fundraising efforts ahead of an epic Canadian climb.

Adventurers Euan Scott and brothers Aiden and RJ Horwood are part of the Cavell 100, who will head to Canada from August 22nd to 29th to climb Mount Cavell and lay commemorative wreaths at the summit, marking 100 years since Edith Cavell – a British nurse during the First World War - was executed.

The boys are organising and funding the expedition themselves and will be sponsored for the climb. They have already organised a talk at Hartpury by famous mountaineer, Doug Scott CBE, at Hartpury as well as a cake sale and now the fundraising is about to move up several gears.

Despite the degree of toughness that the Mount Cavell climb will present, the trio are not holding back in their preparations and are planning two challenging events back to back, one kitted out as World War I soldiers complete with a ‘casualty’ on a stretcher!

First up is a 200-mile bike ride from July 10th to 13th. Starting in Norwich – Edith’s birthplace - the Trust team featuring the students will then head through Felixstowe to the Hook of Holland and on to the finish at the Edith Cavell Hospital in Brussels.

They will barely have time to ease off any aches and pains before they head off on a six-day hike in the Lake District starting on July 16th that will see them scale the highest peaks of Cumbria.

These gruelling series of challenges will raise money and awareness of the Cavell Nurses Trust, which supports medical staff and students who have fallen on hard times.

The Trust was set up to commemorate the actions of Edith Cavell, who saved the lives of soldiers from both sides without distinction. However, in 1915, she was arrested for helping 200 allied soldiers to freedom and sentenced to death for treason, shot by a German firing squad.

The trio will begin their assault on the highest peaks of Cumbria three days later. Focusing their route around Keswick, they will be part of a team of 13 aiming to scale higher than the summit of Mount Everest (8848 metres). They will tackle the ‘Bob Graham route’ of 42 peaks but add a few more peaks in to make sure they exceed their target!

The challenge will be made even harder by the fact they will only be accumulating distance on the elevation of each mountain and they will be kitted out in original World War I army uniforms. The aim is to replicate the hardships the soldiers faced because the equipment and clothing issued to them was not fit for purpose. The team will carry a war styled stretcher with a weighted dummy on it to represent Edith Cavell’s services to the soldiers.

Euan, 18, said: “We are all fully aware of the magnitude of the challenges in store and doing them back to back will make it even tougher. However, we aim to have as much fun as possible along the way and it will be really rewarding knowing that we’re doing everything we can to raise as much money as possible for such a great charity.

“The Cavell Nurses Trust is a cause close to our hearts as my dad is a patron of the charity and Aiden and RJ’s mum is a nurse.

“We think that we will be the youngest people doing these charity challenges. It’s really important to us that we raise awareness among our generation about the sacrifices that were made during the First World War and of the incredible work of Edith Cavell and the Cavell Nurses Trust.”

The Trust would welcome anyone who would like to join the team for a leg of the Cumbria hike to show their support. More details will be posted nearer the time, including where the team will be and when, on the Cavell Nurses Trust Facebook page and on twitter @CavellTrust. You can register your interest to join the walk on these pages too.

Another Doug Scott fundraising lecture is also planned on July 9th in Norwich ahead of the bike ride. Doug will talk about the south west ascent of Everest in celebration of the 40th anniversary of the climb that he undertook with Dougal Haston. The money raised will again be split between Doug’s charity, Community Action Nepal, and the Cavell Nurses’ Trust. 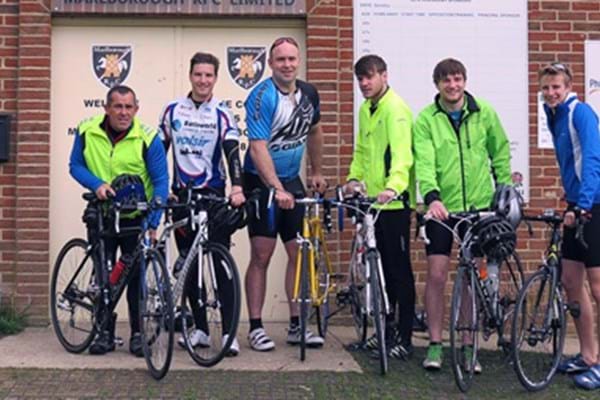