Joe Harvey fired Hartpury College to the British Schools and Colleges Tour title with an outstanding course record five under par at The Dukes Golf Club at St Andrew’s.

Harvey, 17, streaked away from the competition on the opening day at the home of golf with his five under par score of 66 putting him four shots clear – a margin which he improved to seven by following up with par in his second round.

His 137 total was enough not only to put him well clear of the individual competition but also helped Hartpury to victory in the team event as the Gloucestershire side also finished seven shots clear of their nearest challengers, the Golf College, in the team gross event.

Harvey (pictured) was joined by Alex Chalk – who finished fifth outright – Tom Davies, Kobe Adams, Kieran Sutton and Alex Ireland as the team posted a total of 583 to claim their second victory of the day. Leading by three shots overnight, the group improved their lead on the second day to seven shots overall. The team also finished second overall in the nett event to cap an excellent event.

Hartpury’s Golf Manager, Rich King, said “We came into the finals with each of the boys having put in some strong performances in recent weeks and also in the preliminary events. We have shown what we’re capable of during the past couple of days but I truly believe there’s even more to come from this team.

“Joe put in a stand out performance and I’m pleased for him as it’s a very tough course and to shoot five under is an excellent achievement. But this was also a team event and the other guys here have backed him up brilliantly with some good scores to earn us the team title.”

Hartpury have a good record in this tournament, having picked up the girls individual title last year as well as claiming victory in both the gross and nett events by large winning margins.

Rich and his team will now turn their attention to next week’s Intercollegiate Tour finals, with Hartpury graduate Tom Sloman the reigning champion. 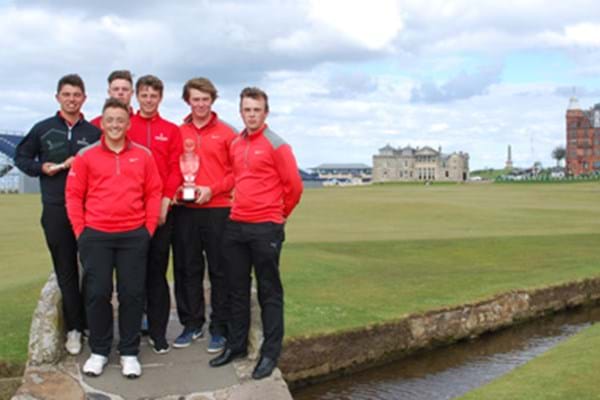