Hartpury's hopes of securing an historic treble were dashed after they suffered a heartbreaking defeat on penalties in their English Colleges Football Association (ECFA) National Championship play-offs final against Football Academy of Bisham (FAB).

After 110 minutes of action at Notts County's Meadow Lane that saw six goals evenly split between the two teams, the lottery of the penalty shootout eventually separated the sides as Hartpury fell just short of retaining the title they secured last year, when they defeated Gateshead College 4-3 in the final.

Sierra Leone sensation, Mustapha Bundu, scored a fantastic hat-trick as he twice put Hartpury in front before producing a fine individual effort to bring his side level in extra-time after their opponents took the lead for the first time in the contest.

But Hartpury couldn't quite get over the final hurdle, with FAB claiming the spoils 4-3 after penalties.

This national play-off final started quietly with neither team able to take control, although Hartpury's opponents were intent on keeping possession across the whole pitch.

Hartpury were able to stifle any attacks quickly and looked to use the pace and guile of Bundu, Sam Hicks and Jordan Ricketts as a counter-attacking outlet.

After 25 minutes, the above triumvirate combined brilliantly, which eventually saw striker Jordan Fletcher roll the ball across the penalty box to Hicks, whose rasping drive whistled past the keeper but cannoned back off the post.

The rest of the half proceeded without any notable incidents as both teams struggled to take a grip on the game.

The second half, however, was in stark contrast as Hartpury came out after half-time firing.

Just two minutes into the second half, Bundu ghosted past his opponent on the left byline and cut inside, where he was denied by the keeper's legs.

Hartpury began to seize the initiative and, just a few moments later, both Ricketts and Bundu blazed over the bar.

Hartpury were in the ascendancy and in the 55th minute, a ball out wide from midfielder Will Haines found the head of Bundu, who expertly guided the ball past the keeper and into the top corner.

However, just two minutes later, their opponents drew level as Hartpury failed to clear a corner and the ball was eventually bundled home to bring the game back on level terms.

This didn't deter Hartpury and they continued to take the game to FAB, with centre midfielder Sirdick Adjei-Grant becoming increasingly prominent after good work by the industrious player saw Bundu tee up Ricketts, who could only shoot straight at the keeper.

Grant was again involved when he skipped past multiple players before laying off for Ricketts, whose strike was deflected.

After 66 minutes, Hartpury were almost back in front after centre half George Shutt headed the ball onto the woodwork but the ball was only cleared as far as Hicks, who produced another teasing delivery and Bundu made no mistake with the finish, beautifully flicking the ball past the keeper at the near post and putting Hartpury ahead again.

Hartpury's defence were able to stifle any opposition attacks for the next 10 minutes, with FAB only managing to create one half chance that saw the ball fly over Harvey Rivers' goal.

From the resulting goal kick, Rivers was unfortunate to slip as he struck the ball, and the ball fell straight to an opponent. He played a team-mate in with a simple pass, and the FAB forward coolly dispatched his shot past Rivers.

When extra-time arrived, Hartpury started brightly. Substitute Callam McOnie went on a mazy run from the right wing and after he jinked his way inside the box, the winger saw his drilled effort saved again by the keeper's legs.

On the stroke of half time, FAB produced a delicate slide rule pass that evaded the Hartpury defenders and was met by an oncoming forward, who took the ball in his stride and slotted past Rivers to give them the lead for the first time.

In the second period of extra-time, Hartpury began to push for an equaliser and some good work down the right flank from Sol Wheatley saw him evade two defenders and produce a sublime cross that Fletcher was able to get his head to. However, the keeper was able to dive across and make a comfortable save.

With just a few minutes of the tie remaining, Hartpury equalised from a magnificent piece of individual skill from Bundu, who was a constant menace.

After a long ball was played upfield towards Bundu, the electric forward was able to hold off his marker and leave him trailing in his wake. As he tricked his way into the penalty area, he put the ball through the legs of one defender while holding off another, and with the keeper bearing down on him, he was able to poke the ball past him and into the net.

When penalties arrived, captain Nathan Summers provided Hartpury with the perfect start while FAB also made no mistake from the spot. Jake Robinson then dragged his effort from 12 yards just past the post but Rivers was able to save FAB's second penalty to ensure things stayed level.

McOnie then agonisingly saw his penalty come back off the post and FAB took advantage by scoring their next two efforts, with a successful penalty by Hicks sandwiched between them.

Bundu then had to score to make sure Hartpury were still in with a chance, and the forward produced an outrageous chipped effort that left the keeper with absolutely no chance.

Unfortunately for Hartpury, their opponents scored their final penalty to secure the win and leave Hartpury just shy of obtaining an unprecedented treble.

Paul Tassell, Hartpury's junior manager, said: "I'm extremely proud of the performance that each member of the squad gave in the second half and extra time. They gave absolutely everything, like they have done all season, and were unlucky not to get the reward their efforts deserved. We gifted them a couple of goals which cost us but the character we showed was priceless."

"Losing on penalties is always tough but I know that each one of the lads will learn from this experience and use it to become better people in the future. It has still been a great season and they have represented the college fantastically all year." 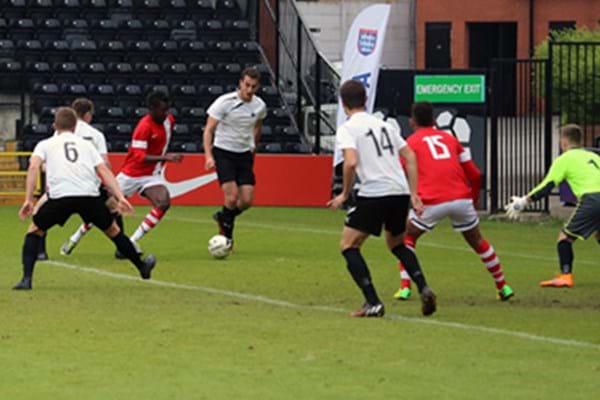