Bradley, 16, stormed to victory after a near flawless performance in the final discipline - the combined event - saw him power past the competition and secure first place, while Harry put together a consistent effort throughout and was rewarded with a final position of third in the boys’ category.

After a positive start in the 200 metres swim section, the two Hartpury A-level students then produced a near-flawless demonstration in the show jumping stage with Harry, 17, sitting one place above Bradley in second place after that stage.

The position of the two remained unchanged after the fencing with another assured showing from both but Bradley then propelled himself past Harry and another competitor with some fast shooting and strong running to finish atop the leaderboard, while Harry overcame an ankle injury to ensure third spot.

The duo’s latest performance has added to their strong showing all season, which saw Harry represent Great Britain at the European Athletics Junior Championships in Bulgaria last month for the first time in his career.

Mat Dewey, Hartpury’s programme manager for Modern Pentathlon, said: “Both Bradley and Harry have had a great season and this was another great performance. I’m absolutely delighted for both of them and their achievements are immense, both for them as individuals and for the college, which is fast growing in reputation for the strength of its up and coming modern pentathlon stars.” 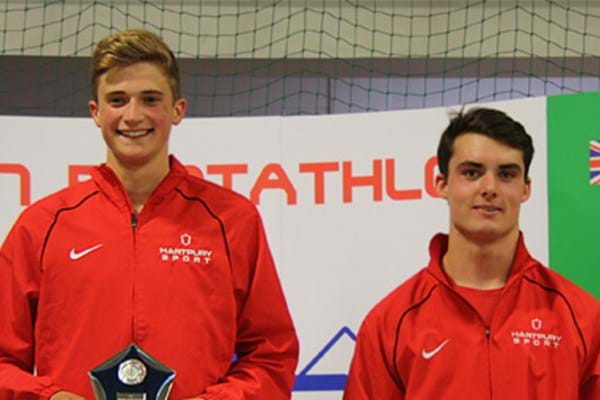