Hartpury’s rowers took the Henley Women’s Regatta by storm as they equalled the course record on their way to a commanding victory in the senior quad event.

Two-time junior champions at the event in the last two years, the crew – made up of AASE rower Flo Pickles and A-level students Alice Bowyer, Frances Russell and Charlotte Hodgkins-Byrne – decided to make the step up to senior level looking for a tougher challenge with Henley Royal Regatta just a couple of weeks away.

A win over Oxford Brookes University in the opening round was bettered as the Gloucester Hartpury crew secured victory against Thames Rowing Club as they equalled the course record that had just been broken by event favourites, and their semi-final opponents, Cardiff.

Sunday’s semi-final saw the favourites, featuring former Hartpury student Lauren Williams, race into an early lead before being pulled back during a strong middle section as the Gloucester Hartpury crew maintained a better rhythm to takes a lengths lead.

A late push from Cardiff saw both crews finish almost neck and neck but Hartpury just managed to hold on for a narrow victory – though neither crew knew the outcome of the race until it was officially announced.

Despite a hard-fought and close semi-final, Hartpury went on to claim their maiden senior title at the event with relative ease, beating Maidenhead Rowing Club by five lengths.

Hartpury’s rowing coach, Tom Pattichis, said: “This was a great achievement for a crew made up entirely of junior rowers, especially given that they not only won but also equalled the course record.

“It will be excellent preparation for Henley Royal Regatta where we will be up against close rivals, Marlow, and strong international competition including the American National Junior champions.”

At the same event, Hartpury’s B crew entered the junior women’s quad sculls event, qualifying from the time trials but unfortunately losing out to William Borlase School in the last 16. BTEC Sports Coaching students, Francesca Ford and Bryony Lawrence, alongside A-level students Alec Watson and Sophie Heath, formed the crew who will be hoping to gain a spot at Henley Royal via the qualification time trial which takes place this Friday (June 26th). 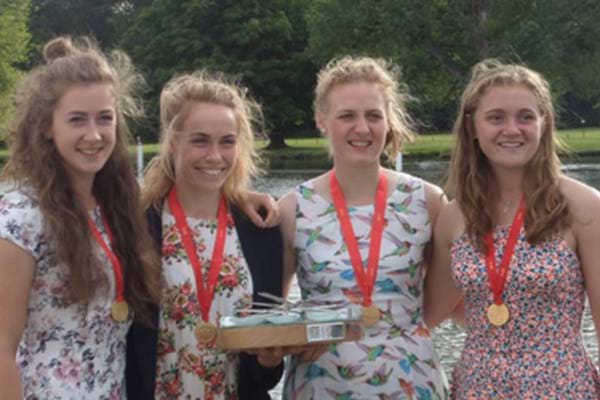