Having joined Hartpury as a 16-year-old to study Animal Management, dog handler Jenna Mayo would never have imagined her qualification would have helped take her all over the world.

Jenna, 30, who is from Stroud, has spent the last few years travelling to places like Afghanistan helping to search vehicles for arms and explosives as well as America and Lebanon in her role as a dog handler and trainer in the Royal Army Veterinary Corps (RAVC).

“Joining the Army was not something I had always wanted to do or even thought about,” Jenna said.

“My original career plan after finishing at Hartpury was to join Gloucestershire Police with the intention of eventually getting into dog handling. I was unsuccessful during the application process and so researched other jobs with dogs. It was then that I looked into the prospect of working for the British Army.”

Having also completed a Foundation Degree in Animal Behaviour and Welfare at Hartpury, Jenna joined the army and, as every solider must, completed 14 weeks of a basic training before beginning her education as a dog handler.

Since her training, Jenna has found herself in Afghanistan’s Camp Bastion, Lashkar Gah and Sangin as a vehicle search dog handler as well as on the other side of the Atlantic learning how to handle role-specific search dogs which were being used in war zones.

“I currently train RAVC soldiers to be Class 3 Military working dog handlers. I train the students how to handle and care for a patrol dog safely wherever they may be deployed. In between courses, I help care for and maintain our fleet of course dogs.

“My training at Hartpury definitely confirmed my love for animals and helped me to pursue a career in this field. Becoming a military working dog handler is an extremely popular job choice within the army and so the RAVC have a separate interview to join. I have no doubt the qualifications and skills I gained at Hartpury helped me get the job.” 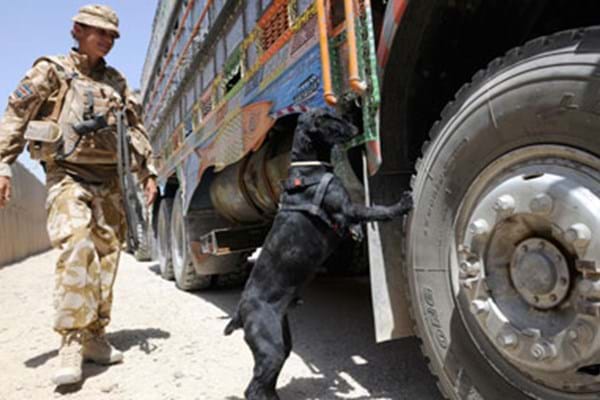