Two Hartpury students flew out to Finland to represent both Hartpury and Great Britain at the Equestrian Education Network (EEN) European Student Championships.

Katie Patrick and Madison Penfound attended the third EEN European student Championshipsat the Ypäjä Equine College in Finland last month. They went up against eight other nations in a host of challenges, with Katie and Madison finishing in the fourth and fifth placed teams respectively.

For the championship, the nine members of the EEN selected two students to compete against each other. Riders were then put in mixed teams and competed in dressage, show jumping, pedagogy and equitation theory over four days.

Katie, 19, who is studying a Bioveterinary Science Degree at Hartpury, said: “We were competing against riders who had been selected as being the best in their country, who were studying at schools which focus solely on the training of horse and rider, so we were really pleased to finish so highly.

“The two that made it to the final were professional riders and it was great to watch. It was a great experience and I learned a huge amount. I also met some fantastic people, coaches and riders and have come back full of inspiration and motivation to improve my own riding!”

While Katie is an Animal and Land degree student, she is also part of the college’s Equestrian Club’s progression programme along with Madison, 20, from Canada, who is a second year Equine Business Management student at Hartpury.

Alongside the student representatives, two Hartpury College staff attended the Championships. Jeremy Michaels acted as one of the competition’s technical delegates and Victoria Lewis, who is subject manager for university level sports coaching, education and business and a BHS senior coach, coached the second placed team and third placed individual.

She said: “It was a great opportunity to work with Hartpury’s EEN friends from France, Germany, Norway, Sweden, Portugal and Holland. The competition was very well run, the horses were of a very high standard and very well behaved and there was the opportunity to sample the Finish culture, hospitality and wonderful food, which is always a bonus!” 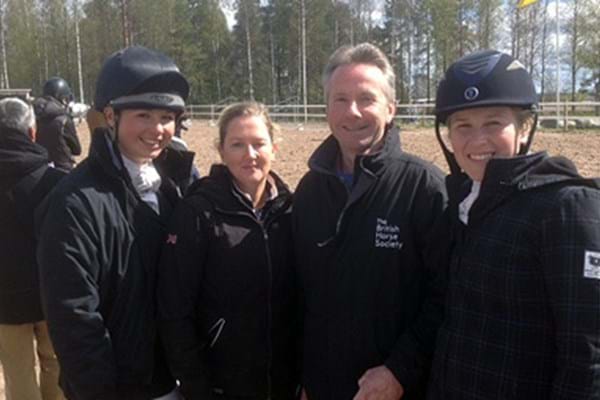