Twenty-five pupils from five primary schools - Finlay Road, Kingsholm, Beech Green, Al Ashraf and Grange – made it to the final after qualifying through earlier rounds, which were also held at Hartpury.

Freddie Clarke, a 10-year-old pupil who attends Grange Primary School, said: “I really enjoyed today and I had a lot of fun, especially when trying to hit the ball as far as possible!”

After a great day of golfing action which saw pupils swing for cup glory in various chipping and putting challenges, all five teams performed brilliantly. Finlay Road eventually held the trophy aloft, having amassed a total score of 4089 points to be crowned champions for the second consecutive year.

Lukas Neal, a 10-year-old from the victorious Finlay Road Primary School, added: “It was awesome and a really fun day! The coaches (Hartpury students) were cool and they helped loads. I really liked today because we got to putt and hit the ball long.”

The final consisted of playing six holes with each team of five being split into two sets. Each set played alternate shots and points were given depending on their score. In the afternoon they competed in six different challenges and all the scores from the day were added up for each school.

The competition was planned and run by first year BTEC Diploma students on the golf programme with help from the BTEC Level 2 Diploma in Sport students and the schools were full of praise for all of the young coaches.

“Finlay School have had an amazing time competing at the tournament and all events have been well organised, exciting and given a real insight into a sport that the children do not normally get access to,” added Finlay Road Primary School teacher, Emily Allan.

“The students and staff created a real buzz and the children came away having had a really fantastic day!”

Paul Johnson, Sport Lecturer at Hartpury, said: “It was a very enjoyable day and every pupil performed extremely well, as did our students.

“We're really proud of the partnership work we do with schools and communities throughout Gloucestershire and beyond. These kind of events give our students confidence and experience and it’s so rewarding for them seeing the enjoyment the children get out of the day.”

Tri-Golf is a ‘mini’ version of golf for primary schools, which involves the use of adapted equipment and a variety of games designed to provide an enjoyable introduction to the sport. 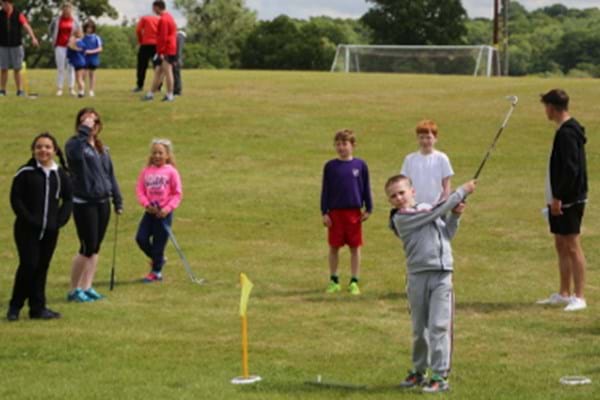