The Hartpury support team helping Cheltenham’s Ben Hooper get ship-shape for his epic 2000-mile Atlantic swim have been boosted by a new piece of kit.

Hartpury’s Richard Collins, Tom Cresswell, Ben Drury and James McCarron, are the Sports and Exercise Team behind Ben, who is preparing to become the first person to swim the Atlantic Ocean from Africa to Brazil.

And Head of Physiotherapy at Hartpury, Tom, has recently been making the most of the latest technology to aid recovery for elite, endurance athletes with Ben at the college’s new therapy suite – the Cyclo-ssage full body therapy system.

Ben will be swimming front crawl for up to 12 hours a day when he starts his ‘Swim the Big Blue’ adventure in November 2015 in Dakar Harbour in Senegal. The epic 90-day swim will take him through 30-foot surges in shark inhabited regions and he will encounter jelly fish, flying fish and a harsh Equatorial sun. He will also swim through “The Doldrums” – infamous for their stillness and humidity – and not forgetting the prospect of raging storms!

Getting enough good quality sleep during the expedition will clearly be a challenge, but it is vital to the success of the swim, and that’s where the Cyclo-ssage comes in. This new therapy system combines massage with infrared heat and can be used for pain management but also to alleviate stress and fatigue and boost recovery.

Tom said: “The bed works by using oscillation, combining heat and vibration. We’ve been using it two to three times a week with Ben to speed up his recovery and for relaxation, so it’s key to our preparations.

“Ben will also be able to use it to fall asleep on at night during the challenge. It should allow his body to relax more quickly, boost the circulation back to his heart by keeping his feet elevated and help with lymphatic drainage. That all helps with recovery and will mean he should feel better prepared to face each day.”

The swim will be broken down into two six-hour periods with two hours of rest on the support boat in between.

Should Ben meet a smack of jellyfish during his swim, he could be forced to wear a ‘stinger suit’ to minimise the effect of stings and he will be equipped with a ‘Shark Shield’ device, which emits low frequency electrical fields. The support boat will also be equipped with a counter-shark device and shark-safe chemical repellents.

The man charged with making Ben mentally strong enough to face this challenge is Chartered Sport and Exercise Psychologist, Richard Collins, who is head of Sports Psychology at Hartpury. He has experience of working with Great Britain athletes and international sportsmen and women in a range of sports.

Ben Drury, a university lecturer in Strength and Conditioning at Hartpury, has an extensive background of training and preparing athletes and teams in endurance sports. He and James McCarron are working closely with Ben to ensure he’s in the best physical condition for the swim.

Ben Hooper said: "The Swim the Big Blue expedition is without doubt the biggest challenge I have ever faced. It will test my abilities and levels of endurance to the absolute limit and the support of Richard, Tom, Ben and James at Hartpury has been invaluable in preparing me, both physically and mentally, for what lies ahead.

“I’m hugely grateful to cyclo-ssage for helping to finance my expedition and for providing me with this fantastic bit of state-of-the-art kit, which will be a massive help before, during and after the swim. If I’m feeling relaxed and rested, I’ll be able to perform better, it’s that simple!” 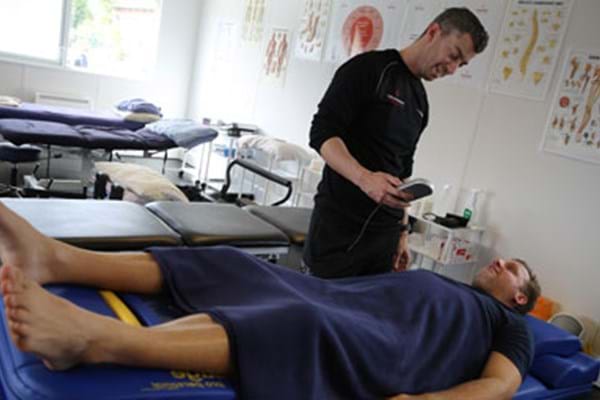