Hartpury’s animal collection now boasts yet another species with a fearsome reputation as a trio of boa constrictors have joined the new piranha and Siamese fighting fish.

At only three months old, the three slithering sisters are currently only little critters at around 50 centimetres in length but they will each grow to around eight foot long eventually. By the time they reach around a year old, they will be a good size for the students to get accustomed to handling them at around four foot long.

Colin Stevenson, Hartpury’s animal collection manager, said: “Boas give birth to live young – called ‘livebearers’ – rather than laying eggs and these little guys had about 20 brothers and sisters, so taking them all would have been a tall order!

“One of the reasons for getting them in is to educate the students around the myths surrounding this species. They have a reputation thanks to Hollywood that needs to be straightened out!

“While they do grow to around seven or eight feet, they do not get big enough to eat people or crush them to death! They do wrap around their prey to constrict them but it’s only really anacondas that could crush people!

“It’s important that they are handled regularly though in order to socialise them. They have around 100 teeth that are like needles curved backwards but they are not at all venomous.

“One student can comfortably handle a fully grown snake and when they come back in September, they will be involved in all aspects of their care. We’ll also be supporting them to confirm the sex of the snakes as we’re not entirely sure!”

The boa constrictors are currently being kept away from other snakes in a separate temperature controlled tank. As their tongues are really sensitive to smells, it is important their senses are not overloaded by proximity to other animals and reptiles.

Colin added: “They are growing really well and are such a beautiful species. We’ve started them out on pinkie mice and they will move on to bigger rodents as they get larger.

“It’s fantastic for our students to get opportunities to handle exotic species like this. If they are hoping to go into the pet trade, become veterinary nurses or to work in wildlife parks and zoos, they are likely to come across boa constrictors so it is important for them to gain experience in caring for them and handling them.” 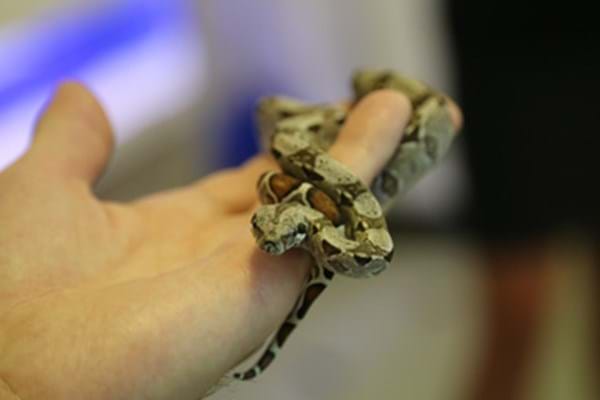