After yesterday’s scintillating display with Valegro, Charlotte Dujardin produced yet another top performance as she secured top place in the Six-year-old Shearwater Young Horse Championships in the fourth day of action at the Hartpury Festival of Dressage.

Dujardin, who will be in action with Valegro again tomorrow, said: “I’m thrilled with today! There was a great atmosphere and a great experience for her [Mount St John Freestyle].”

In the Five-year-old Shearwater Young Horse Championships, a magnificent score of 91.000% by Lucy Cartwright and San Marco saw them finish ahead of Dujardin and Florentina VI, who finished with a score of 85.000%, while third place went to Rebecca Hughes and Classic Flamboyant with a score of 83.400%.

Nicholas Lawson and Gladstone clinched the Four-year-old Championships with a score of 85.600%, with Hughes finishing in second place in this class after producing a score of 84.400% riding Classic Gold Strike. Henry Boswell and Fidelius rounded off the top three with a final score of 79.400%.

In the afternoon’s action, a chance to compete at tonight’s Gala Evening – the pinnacle of the Festival of Dressage – was the prize on offer to the three best riders in the BYRDS A Squad Ride Off.

The 2015 BYRDS Inter-Regional event took place recently with teams of riders from regions all over the UK competing. Today, the top riders from the A squad competition competed in groups of three, all riding each other's horses, and they were judged by International Rider Dan Sherriff.

Philip Cheetham, Hartpury's Equine Director, said: “This competition gives young people the chance to ride at a high profile international show. It also enables British Dressage to demonstrate how our rider development works and to give centre stage to the talented young people they are developing for the sport of dressage.”

The three riders who went through to the Gala Evening were Samantha Gualtieri, Emily Watts and Emily Blount.

A chance to compete at the Gala – the pinnacle of the Festival of Dressage – was also the prize on offer to the three best riders in the BYRDS A Squad Ride Off.

In the Shadow Horse FEI CDI Intermediate I competition, British rider Becky Moody found herself in two of the top three positions after producing a winning score of 74.421% with Carinsio, while later securing third place in the competition with a 71.026% score riding Tirsa. Charles Hutton and Super Blue finished in between Moody’s scores after producing a total of 74.316% to secure second place. 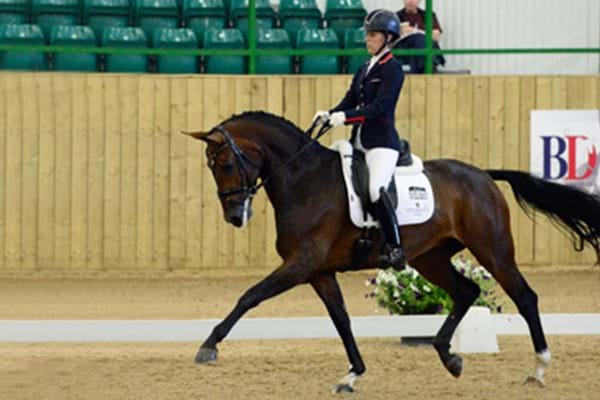