Four Hartpury rowers will represent their countries in the Home International Regatta after a successful weekend at the British Rowing Junior Championships.

The squad picked up four medals in total, one from each under 18 women’s sculling events, at the competition in Strathclyde, Scotland.

Alice Bowyer, who will be competing for Great Britain at the Coupe De La Jeunesse in Hungary, and Charlotte Hodgkins-Byrne completed a Gloucester-Hartpury one-two in the junior women’s single sculls.

The third medal of the weekend was picked up by Frances Russell and Bryony Lawrence in the junior women’s doubles. The pair, who got faster as the competition progressed, finished eighth in the time trial before winning their semi-final and eventually gaining a bronze medal with a third place finish in the final.

Victory for the crew saw them gain selection to represent England at the Home International Regatta, which will take place in Strathclyde this weekend. With Charlotte Hodgkins-Byrne already selected for the single sculls, Bryony Lawrence will take her place for the competition.

The regatta sees crews from England, Ireland, Scotland and Wales compete against each other in junior and senior events. As well as the four Gloucester-Hartpury girls competing for England in the quad and single sculls events, fellow rower Francesca Ford will be representing Wales in the junior quad.

Hartpury’s rowing coach, Tom Pattichis, said: “All of our rowers have shown great improvement over the course of the season which is clear through the success we’ve seen and it’s great to see four of them representing home nations in the upcoming international regatta. It promises to be an interesting battle with three in the England quad and one in the Welsh quad that will be going head to head.” 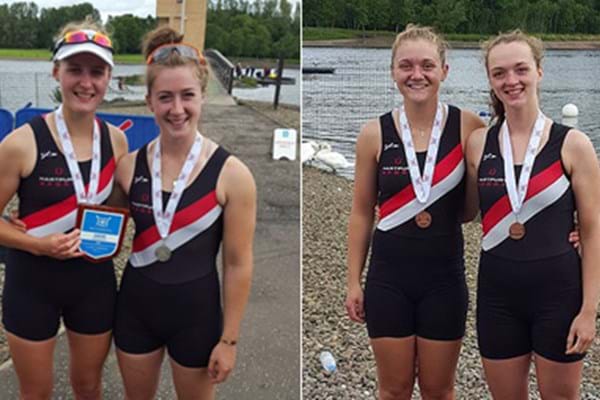