Great Britain’s para dressage finest were the stars of the show as spectators were treated to a host of outstanding performances on the first day of the Hartpury Festival of Dressage today.

With qualification points for the Rio Paralympics in 2016 up for grabs, the GB contenders achieved some spectacular scores and the top spots in most of the para dressage classes.

Two Great Britain riders also took the top spots in the 1b as Lee Pearson and Zion finished well ahead of the field with 75.920, with Natasha Adkinson on Sweet Caledonia second with 70.400%.

However, GB’s Nicky Greenhill wowed the crowds in the Grade III with 71.158%, which handed her first place on Gregorian Chant. Heather Bennett scored 70.211% for second place and third place went to Roberta Sheffield with 68.500%.

In the Grade IV, Sophie Wells claimed first place with a score of 74.310% riding Valerius and second place with 69.286% riding C Fatal Attraction. Third place went to Charlotte Cundall riding The Chenko Artist, with a score of 67.476%.

In the able-bodied Premier League, Lucy Cartwright won both the 1a and 1b classes in the Fairfax FEI Prix St George. She achieved 69.693% in the 1a, riding Fergana, and while Beth Barnett was second, two up and coming dressage riders with Hartpury links filled third and fourth place.

Lucy Pincus, a student on the Equine Advanced Apprenticeship in Sporting Excellence (AASE) provided by British Dressage and British Eventing and run exclusively at Hartpury, came in third with 68.114% and Emma Corbett – a recent Equine Science graduate who is based in Upleadon - was fourth with a score of 67.456%.

Cartwright then achieved a fantastic 70.746% in the 1b riding Waterloo V, with Nathalie Kayal achieving second place and Maya Goldburg taking third.

Former Hartpury A-level student and Hartpury Equine Academy talent, Olivia Oakeley, who is based in Stroud, performed well in the Baileys FEI Intermediate II. She rode Donna Summer to a score of 65.263%. It was tight at the top with winner Gareth Hughes on Samba Hit III and Maria Eilberg on Royal Concert both scoring 68.816%. Alice Oppenheimer was third on Headmore Bodicia with 68.158%.

Sonnar Murray Brown topped the pile in the NAF Five Star Optimum Advanced Medium, riding Erlentanz to a stunning score of 75.526%, finishing ahead of Lisa Hopkins on Cortez with 70.921% and Nadine Gregory on Candover Dramatico with 68.684%. The latter pair also finished third in the Tagg Equestrian Advanced Medium with 69.459%, as Lisa Hopkins took top spot on Cortez with 71.351% and Tor Smith and Sundancer II finished second in 70.270.

Excitement now builds for day two tomorrow (July 9th) as Michael Eilberg will be aiming to impress on his own horse, the superstar Woodlander Farouche, in the Elite Stallions Young Horse Prix St Georges Qualifier and Charlotte Dujardin will be looking to triumph in the LeMieux FEI Grand Prix, riding Barolo. Valegro will not join the Festival party with Charlotte until Friday.

The Festival runs until Sunday, 12th July, and admission on Thursday 9th and Friday 10th is free. For information on weekend tickets, go to www.hartpury.ac.uk/dressage . There is no charge for parking.

You can also see the full results from today’s competition on this website, plus the latest news and information on competition entries, as well as on the Hartpury Festival of Dressage Facebook and Twitter. 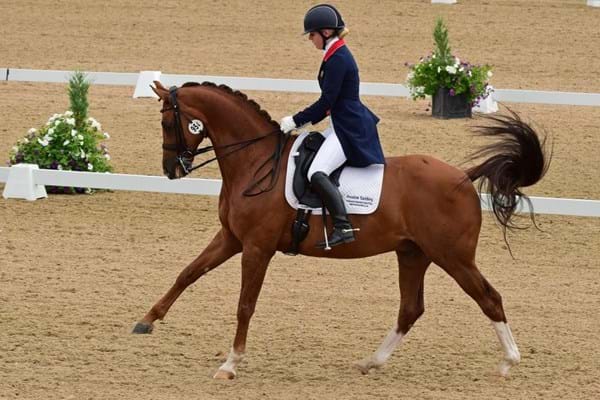