The Gloucester Hartpury women’s quad completed an incredible treble this weekend when they hit back to clinch victory at the prestigious Henley Royal Regatta.

The latter trio were looking to retain the title they had won last year, when they also won the Henley Women’s Regatta but lost out in the National Schools.

Seeded for Henley Royal, the quad went automatically into Friday’s quarter-finals and got off to a flying start against Sir William Borlase Grammar School. Breaking the course record at the first of the three markers, the girls were then able to take their foot off the pace and still win comfortably.

They faced a much stiffer test in the semi-finals on Saturday, when they raced the American National Champions. The Y Quad Cities crew featured two rowers who have already been selected for the Junior World Championships, having been released by their Federation to race for their club.

In an incredibly exciting race, the Gloucester Hartpury crew were ahead at the first marker, went behind in the middle section and then ended up winning by around two lengths.

Sunday’s final saw them pitted against their biggest rivals, Marlow, who they had pipped in last year’s Henley Royal Regatta final and in this year’s National Schools final. The race lived up to expectations as Marlow led at the first two markers but Gloucester-Hartpury dug deep to find a late surge and claim victory to take the Diamond Jubilee Challenge Cup.

Hartpury’s rowing coach, Tom Pattichis, said: “The girls showed incredible mental strength to come back from being behind against such tough competitors in both their semi-final and final and I couldn’t be prouder of them.

“We obviously had high hopes for them after they won the senior event and broke the course record at Henley Women’s Regatta and it was great to see them live up to their billing. It’s so tough when a crew gets ahead of you and you can’t see how far behind you are to find that something extra to hit back and win. It’s rare to get back into a winning position from there, so to do it twice, is pretty amazing.”

The successful quad members will have no time to glory in their victory, however, as they head into a range of major challenges in the coming weeks. While Gloucester-Hartpury AASE rower, Flo, will now start her training with the Great Britain Under-23s lightweight girls team at Caversham, Hartpury A-level students, Alice and Frances, head into trials for the Great Britain junior team this week.

Fellow A-level student, Charlotte, will be preparing for the British Rowing Junior Championships on July 18th and 19th in Scotland. Victory is likely to ensure she is selected for the England team to compete at the Home Internationals tournament in Scotland on July 25th. 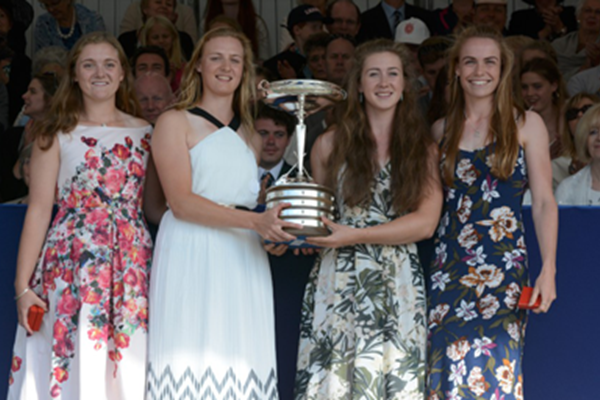