Excitement for the Rugby World Cup 2015 reached fever pitch at Hartpury College yesterday, as the Webb Ellis Cup stopped by as part of the competition’s trophy tour.

Hundreds of people, from businesses to schoolchildren – including those from Hartpury Primary School and secondary schools Dene Magna, Tewkesbury and Lakers - visited the college to get up close and personal with the sport’s most famous trophy as it makes its way round Gloucestershire as part of a three-day tour of the county.

And they were also able to meet a World Cup winner in former England and Gloucester Rugby captain, Phil Vickery, who lifted rugby’s greatest prize in 2003.

Vickery, who won 73 caps for the country, said: “I thought the whole event was brilliant. We are lucky to have such a superb facility as Hartpury on our doorstep and to be able to bring the Webb Ellis trophy here was something special. It was certainly odd handling the trophy again after so much time but it bought back some absolutely brilliant memories.

“I honestly can't wait for this next one to start in September. As the host nation I think seeing the excitement and enthusiasm from all the people here today we are in for the best tournament ever."

The prop was also joined by Steve Brown and Ian Ritchie, the Managing Director of England Rugby 2015 and CEO of England Rugby respectively, as Hartpury’s celebration of the Rugby World Cup continued with the arrival of the Trophy Tour.

The college also hosted a touch rugby tournament yesterday - the West Country Corporate Challenge Touch Rugby Cup - which saw businesses from across the region taking part in a fun-filled day to be crowned inaugural champions of the West Country.

In April, Hartpury played host to a successful major primary school tag rugby tournament, organised and run by Hartpury students and the celebrations will culminate in the college hosting the USA and Scotland international teams as an Official Team Base during the tournament, with those squads using Hartpury’s facilities for training and match preparation for their respective World Cup campaigns.

Hartpury Principal, Russell Marchant, said: “It was a fantastic day and an honour to welcome the Rugby World Cup Trophy Tour to Hartpury. It’s great that we’ve been able to welcome a range of people from the community to join us in our celebrations and we are now very much looking forward to being an Official Team Base as excitement builds for the start of the tournament.” 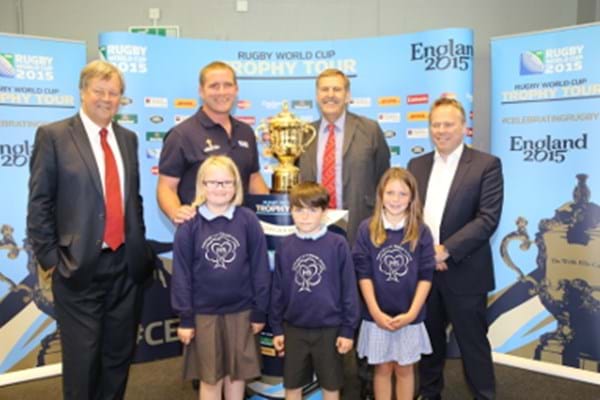