Charlotte, who is based in Newent, heaped praise upon the Hartpury experience as she stormed to victory with a score of 73.120% in the Lemieux FEI Grand Prix on Barolo, who is jointly owned by her coach, Hartpury Elite Dressage coach and fellow Great Britain Olympic gold medallist, Carl Hester, with Anne Cohn.

The world number one will now return to the Festival tomorrow with World Cup champion and world record holder Valegro, and Carl Hester will also be in action on Nip Tuck. The draw will be made later tonight.

She said: “We love Hartpury. We’re so lucky to have a facility like this so close by and it’s such a super show; we look forward to it every year. The people behind the scenes here are incredible and so are the facilities. The water treadmill and the normal treadmill not only benefit us but lots of other local people too.

“I was riding my second string horse here today. Barolo is only nine, which is young for this level of dressage, and we were looking for a good score so that we can continue pushing on with him. It was only his second Grand Prix and I’m really happy with how he went.”

Charlotte finished ahead of Amy Woodhead on Pro-Set on 69.680% and Amy Stovold on Macbrian with 68.700 in the Lemieux Grand Prix.

In the Zamar FEI Intermediate I, Maria Eilberg claimed the honours on Royal Concert with 73.947%, with Lisa Hopkins on Coole Contender second with 70.132% and Nathalie Kayal third on DHI Homerun with 69.649%.

In this morning’s Premier League action, the magnificent Michael Eilberg stole the limelight with all eyes were on him and Woodlander Farouche in the Elite Stallions Young Horse Prix St Georges Qualifier.

Fourth place was achieved by Lucy Pincus, who is on the Equine Advanced Apprenticeship in Sporting Excellence run by British Dressage and British Eventing and run exclusively at Hartpury, who scored 69.254% - another great performance after her podium finish yesterday.

It was also another unbelievable day for Nicky Greenhill, who took first place riding Gregorian Chant in the Grade III Test with an outstanding 73.146%, having also won yesterday’s Grade III Team Test. Greenhill said: “He was just amazing, he tried his heart out and I could not have asked for more.”

Sophie Christiansen also expanded on yesterday’s exceptional performances by scooping a brilliant first (79.870%) and third (73.739%) in the Grade 1a, with Anne Dunham coming in second (74.522%). In the Grade 1b, it was the outstanding performance by Lee Pearson riding Zion that clinched first place, followed by Ashley Gowanlock (71.414%) and Natasha Adkinson (68.931%).

The Festival runs until Sunday, 12th July, and admission on Friday 10th is free. For more information on weekend tickets, go to www.hartpury.ac.uk/dressage . There is no charge for parking.

You can also see the full results from today’s competition on this website, plus the latest news and information on competition entries, as well as on the Hartpury Festival of Dressage Facebook and Twitter. 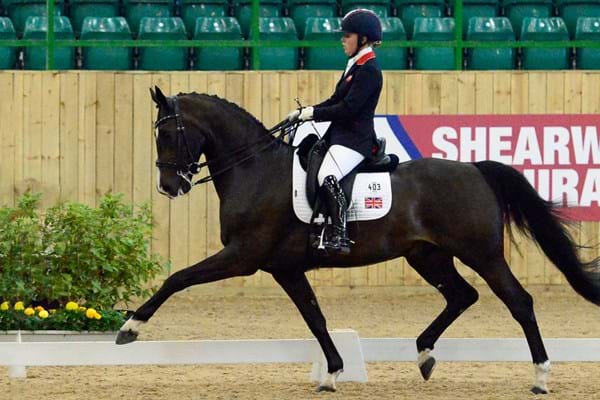