Charlotte Dujardin and Valegro lived up to their star billing in style with a stunning success on the third day of the Hartpury Festival of Dressage.

The world number one dressage duo, from Newent, produced a mesmorising test to win the CDI FEI Grand Prix with an impressive score of 85.440% as they stepped up their preparations for the upcoming European Championships in Aachen Germany from August 12th to 16th. This followed Charlotte’s win on rising star Barolo in yesterday’s Lemieux FEI Grand Prix.

Charlotte’s mentor and Hartpury Equine Academy’s dressage coach, Carl Hester, was also in imperious form on Nip Tuck, delighting the bumper crowd to achieve an impressive score of 78.040% for second place. In third place was Fiona Bigwood with Atterupgaards Orthilia on 76.800%.

It was a fantastic morning for Great British rider, Becky Moody, who won the Horse ScoutFEI CDI Prix St. Georges International I riding Carinsio, with a score of 74.263% and was presented with her prize in a mounted prizegiving by Lucienne Elms from sponsors Horse Scout Ltd.

Today also featured outstanding dressage from the FEI Para Freestyle Tests and Sophie Christiansen continued to blow the crowd away on the third day at the festival. She achieved a spectacular 82.300% on Athene Lindebjerg in the Grade 1a and won the prize for the best overall para dressage rider at the Festival.

She said: “I am absolutely thrilled with my new horse - Athene Lindebjerg - this is her first International competition and I am really excited about the future. She does not really like noise so freestyle is quite challenging. It was challenging but everyone told me how good I was to keep it together and keep going and I came out with over 80%.”

Natasha Baker scooped first place in the Grade II, scoring 75.600% riding Sooki St James, ahead of Erin Orford and Rebecca Hart. Baker said: “Sooki was good, I'm really, really pleased with her. This is her first indoor competition since last year which was her first ever international. Hartpury is a big arena with a big atmosphere, but I'm so proud of her. She's had such a consistent year, I couldn't have wished for more.”

Nicky Greenhill and horse Gregorian Chant have had an outstanding Festival so far, and day three proved no exception. With yet another first place finish, Greenhill took top spot in the Grade III with 75.700%, ahead of Rosemary Gaffney on Aldham Mill Dubloom (74.200%) and Roberta Sheffield’s score of 72.800% on Double Agent.

Tomorrow promises to bring excitement with the Shearwater Young Horse Championships, the CDI3*, and of course, the highly anticipated Gala Night. 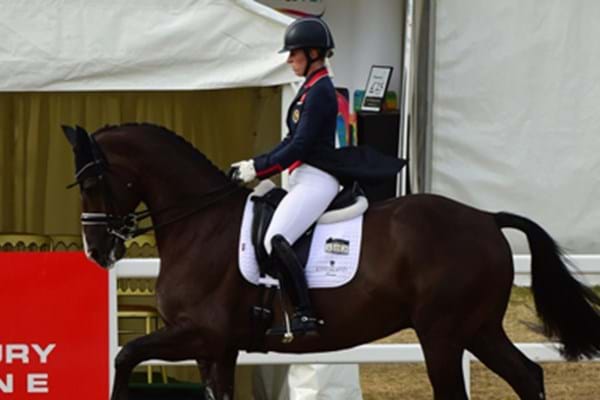