Two Hartpury lecturers have headed off on an Eastern adventure with a mission to develop rugby overseas after a decade spent honing their skills at the college.

Frazer McArdell and Jaike Carter, both 28, started out on their Hartpury journey together as students on a Sports Coaching and Conditioning degree 10 years ago. They went on to complete their Masters in Coaching Science together before embarking on their PGCE teaching qualification to become Further Education lecturers at the college, Frazer specialising in Fitness Studies and Jaike in rugby.

And now the duo have just set out on a new adventure, joining former Gloucester Rugby number eight James Forrester in Singapore as they look to enhance their coaching CVs and share the skills and knowledge they have gained at Hartpury with some of the best rugby talent plying its trade in the Far East.

Former Scotland youth international Frazer, who coached Hartpury’s university second team to the BUCS Trophy final last season, will take on a role as head coach of Singapore Wanderers. Jaike will join him as backs coach as well as playing for the club, who play at a level roughly equivalent to Hartpury RFC. At the same time, the pair will be employed as personal trainers at Forrester’s U-Fit company.

“It’s an incredible opportunity and one we would never have had without the coaching experience, qualifications and contacts we have gained at Hartpury over the last 10 years,” said McArdell, who has also coached Drybrook RFC to two promotions and a national cup final at Twickenham in the past three seasons.

“Singapore are just starting to make a name for themselves in international rugby circles, so it’s the perfect time to be getting involved and we’re hoping to play a part in continuing to propel rugby over there onwards and upwards.

“And we’ll be carrying the Hartpury name with us, shouting about Hartpury’s successes and its reputation as a hotbed for young sporting talent as we help to shape the careers of some of their best young players. Hopefully that will lead to stronger links being developed between Hartpury and schools, colleges and clubs in Singapore and, ideally, to some form of exchange programme.”

For Jaike, the change in role should also help him achieve his ambitions of returning to the international rugby fold in Spain. The talented utility back has played for Spain’s full international XV as well as for the country’s sevens team on the World Sevens Series circuit, having qualified for citizenship while living out there for four years and playing professionally for El Salvador, including in the Amlin Challenge Cup.

“My teaching commitments have meant that I haven’t been available for selection for them this season, but that’s something I’m looking to change when I get out to Singapore as I’d love to help Spain get back on to the World Sevens Series and play XVs for them again,” said Jaike, who coached Hartpury’s sevens team to the BUCS National Championship title last season – Frazer also featuring in that team and assisting with the coaching.

Jaike was also a star performer for Hartpury RFC as they secured an outstanding fifth place finish in their first season after being promoted into National League One.

He added: “It’s hugely exciting that Singapore are now a host city for the World Rugby Sevens Series and I’d love to get involved with the development of sevens in South East Asia if I get the opportunity. It will be great experience for both me and Frazer to coach a high level club in another country, especially one that is so multi-cultural with players from so many different countries and backgrounds.

“It’s a good standard of rugby too. I know the Wanderers include players with international caps and rugby is a massive growth sport out there. It will be an incredible environment in which to develop as a coach and a player, just as Hartpury has been over the last 10 years.

“We’re both so grateful for the opportunities that Hartpury has given us, as students, players, coaches and staff. There’s no better place to develop as individuals and as part of a team.” 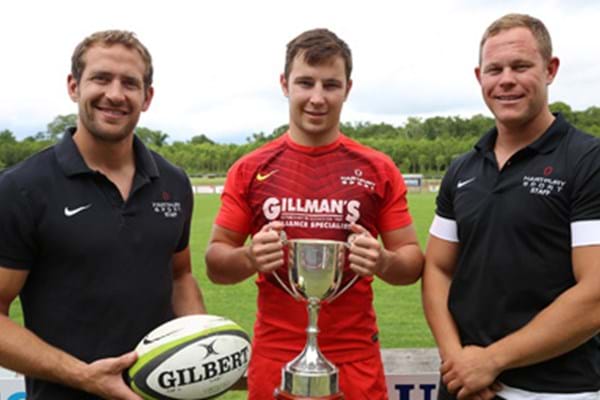