The scoreline scarcely reflected the balance of play, as Hartpury found out the hard way that success in the ‘red zone’ counts for a lot more than ascendancy in other areas of the pitch.

Ealing, now a division above Hartpury following their promotion last season, amassed five tries from, maybe, eight visits to the home 22, whilst the hosts struggled to convert possession into points in a game where they held the upper hand for long periods.

The visitors, fielding a strong side, barely had time to catch their breath in the first quarter as Hartpury’s explosive start had them on the back foot from the whistle. Twice in this period, busy lock forward James Voss was dragged down inches short whilst, on more than one occasion, players went into contact when width might have been the better option.

Under pressure at the set piece throughout, Ealing eventually gained some parity in the match and their ‘nous’ showed as former Dragons prop Nathan Buck was twice put in position to barge his way over from close range. 0-14 at half time was scant reward for Hartpury’s first half endeavour.

With both teams ringing the changes the second half was a more even affair, although still Hartpury were enjoying good possession and territory without showing the cutting edge needed to unlock the Championship defence.

Another close range score, followed by some rare slack tackling, allowed Ealing to extend their try tally to four, before the Hartpury catch and drive eventually brought a reward as Ealing pulled it down to concede a penalty try.

The game remained entertaining until the final whistle. Impressive Ealing skipper Danny Kenny eluded a tiring Hartpury defence with a long range solo effort before, with the final play, Hartpury’s Gareth Thompson (pictured) showed some good skills of his own to cross close to the posts.

Despite the result, the overall performance will have pleased the Hartpury coaching team and there was certainly enough to suggest that the College can again make an impact in National League One.

A solid front five, augmented by dynamic back row options, will be a good match for most opponents whilst a little more guile and composure behind should allow them to make good use of the possession that will come.

We would like to thank Ealing for an entertaining and well-contested fixture and wish them luck for the season ahead. 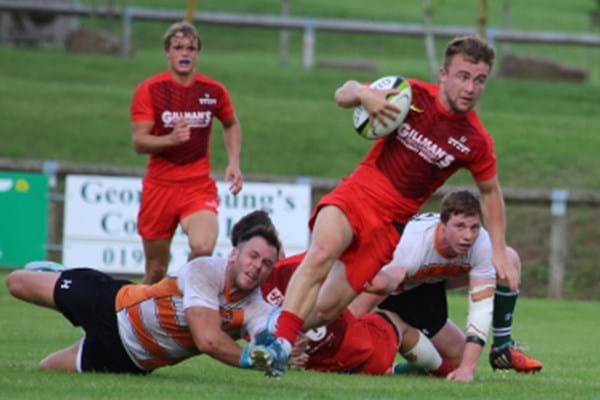