With rugby fever sweeping across Japan after Saturday’s magnificent win over the Springboks, representatives of the Rugby World Cup 2019 host cities from Japan visited Hartpury yesterday to find out more about what it takes to be a successful ’Team Base’.

A 17-strong group of representatives from Japan’s 2019 host cities came on a fact-finding mission to the college, which was selected as a Team Base by both the Scotland and USA Eagles international teams for RWC 2015.

On a visit co-ordinated by World Rugby as part of the ‘Observer Programme‘, they were met by Alan Powderhill - Hartpury’s Sports Academy Facilities Manager and lead Team Base contact - and representatives from England 2015.

Through an interpreter, they were talked through the Team Base process, from the initial bid to selection, preparations and eventually welcoming the teams before touring the facilities.

With Scotland at Hartpury this week as they finalise their preparations ahead of their Rugby World Cup opener against Japan, the excitement for Wednesday’s Kingsholm match-up was tangible among the visitors. The aim of this trip though is to ensure they can build on the legacy of the 2015 squad’s success.

Kei Nakamura, City and Venue Co-ordinator for Japan’s Rugby World Cup 2019 Organising Committee, said: “Excitement is growing among Japanese people here in the UK and back at home, especially after Saturday’s win. All of the Japan rugby jerseys have sold out across the country!

“I don’t think anybody thought that Japan could win against South Africa but now people believe we can be successful. It was so exciting for our group to watch that match but now our job is to prepare for hosting the next World Cup and making it a big success.

“Visits like these are so important so that we can experience the look and feel of a Rugby World Cup and we can ask questions about Hartpury’s experiences of being a Team Base.

“In Japan, we do not have facilities like these at Hartpury, with so many pitches, gyms and equipment. It is very impressive and helps us to understand what we need to do to make sure that we can make a success of hosting the tournament.

“Rugby is growing in Japan and this is a very big opportunity to make sure that continues, especially if we carry on winning. I think we will beat Scotland on Wednesday; I am very confident!”

While Scotland are set to have their team run at Kingsholm today (Tuesday 22nd), Hartpury will now prepare to host the USA from October 8th to 10th.

The Scotland team have been keen to highlight how impressed they have been with the playing surfaces and training facilities provided by the college, and Alan Powderhill talked to the Japanese visitors about the hard work that went into Hartpury’s successful Team Base bid.

For the main training pitch, the floodlights were removed and a bank flattened to extend it by five metres to ensure that the teams could train on a pitch that is the same size as the one they will use for their group matches at Kingsholm.

New posts were also brought in to replicate those at Kingsholm, while the grounds team also attended workshops provided by England 2015. The tournament organisers have also provided specialist gym equipment for the teams to use during their time at the Team Base.

“Building strong relationships with England 2015 and with the team managers for both teams has been absolutely key,” said Powderhill.

“It’s the nature of a major competition that plans are constantly changing so it is really important to be flexible and responsive to their needs.

“We consider it a huge honour to have been picked as a training base for two international teams and knowing that we’ve played a part in making sure their match preparation is as good as it can be makes all the hard work worthwhile, especially when their feedback is so positive.”

Fran Leighton, Team Services Pool B manager, talked in depth to the group from Japan about the challenges and opportunities that face Team Bases before and during a Rugby World Cup, supported by her England 2015 colleagues, Claire Birchmore and Team Base Co-ordinator for Hartpury, Simon Hartland.

The Japanese group will also head to Gloucester’s ‘Fanzone’ at the Quays before watching their country attempt to pull off another group victory over Scotland at Kingsholm on Wednesday, having already met with Gloucester City Council representatives.

World Rugby will bring another larger group from Japan to Hartpury later in the tournament; this time for the college to share its learning with the team who will be responsible for identifying and selecting the potential Team Bases in Japan.

Linda Hoey, Rugby World Cup Ltd Host Union Services Manager, said: “It’s really important that these representatives from 2019’s host cities are able to experience the Rugby World Cup, from taking the shuttle bus and trains to the games to sitting amongst the crowd and experiencing the Fanzones.

“They have had the chance to go behind the scenes at stadiums and see the ‘dressing’ of the host cities.

“At Hartpury, they can soak up the knowledge of people who have had first-hand experience of going through the Team Base process and hosting international rugby teams during such a prestigious competition.

“They can then take that knowledge back to Japan to inform their planning for Rugby World Cup 2019 and ensure they build a lasting legacy for the game in their country.” 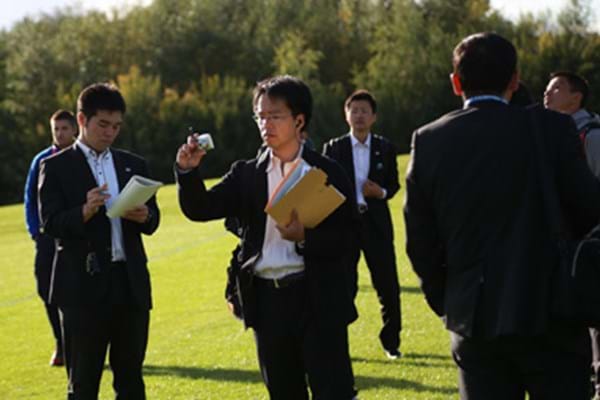