She may be sharpening her reactions rally car driving and taking to the open road on her handbike, but Hartpury favourite Mel Nicholls is not taking her eye off the ultimate prize.

Former Hartpury equine science student and London 2012 Paralympian Mel has had a lighter than usual competition schedule this year as she focuses on peaking at exactly the right times – the 2015 IPC Athletics World Championships in Doha, Qatar in October 2015 and then the Rio Paralympic Games next summer.

“It’s been a strange season as the World Championships have been scheduled to run later than usual because of the intense heat in Doha in the summer months,” said wheelchair racer Mel, who is Hartpury’s Sports Ambassador and races in the T34 category.

“So it hasn’t been about setting new world records and personal bests, I’ve just focused on maintaining my levels of performance and working on my strengths and weaknesses so that I can get the times and placings I need to qualify for the major competitions.

“My ultimate aim is to medal in the 800m in Rio. It’s going to be tough; there are a lot of good young girls coming through, but I think my experience of major competitions will count for a lot.

“My preparations are well on course and I’ve been working hard on many aspects, including working closely with a sports psychologist at British Athletics in the area of performance mindfulness.

“He’s equipping me with strategies to manage every situation and focus on the here and now. I’ll also be carrying out some cognitive testing with the Human Performance Laboratory in London.”

While T34 1500m world record holder Mel is targeting qualification for the Worlds and the Paralympics in the 400 metres and 800m – the latter being her strongest distance – a focus on improving her start and her speed has seen her set new personal bests in the 100m sprints recently.

She also recently finished fourth in the 400m up against the best wheelchair racers in the world at an IPC invitation event in London – a better than expected showing in her weaker event.

And, despite a bout of illness that kept her out of her Hartpury-sponsored racing chair, ‘Dolly’ for three weeks earlier in the summer, Mel also put in solid showings in high level competitions in Switzerland and Italy, as well as in the IPC Grand Prix in London.

“My new training handbike, ‘Acorn’, that Hartpury has provided for me was a massive bonus while I was under the weather, and it’s really helped me boost my overall fitness and endurance,” added Mel.

“While I don’t currently complete on it, the handbike enabled me to maintain low intensity training as I came back from an infection and a shoulder niggle. It also really helps me to balance my power to weight ratio and, because you’re travelling at a higher speed, it’s great for testing and improving your reactions and handling too.”

Those skills have also been tested by Mel’s latest challenge – competing in a series of grass autotests run by Loughborough Car Club. Next up is a winter series on tarmac!

“I’m in a souped up Nissan Micra and its great fun,” added Mel, who is also the 2014 National Duathlon Champion and British cycling National Para Time Trial Champion.

“You have to learn to drive all over again because you don’t exactly do handbrake turns in regular driving lessons! It’s right up my street though as the closest sport to it is showjumping, minus the jumps (!), which I used to compete in. We do manoeuvres and slaloms through cones and it’s all on a stopwatch. It’s great for testing my reactions and has improved my accuracy too.” 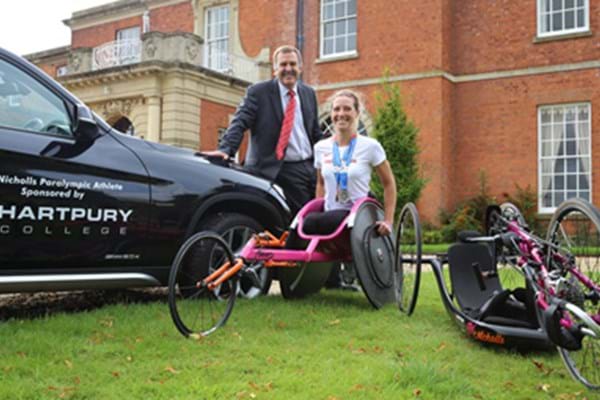