The Rugby World Cup 2015 officially begins for Hartpury tomorrow when the Scotland national team arrive at the college as they get ready to kick off their RWC campaign.

And in the days prior to the fixture, the squad will be using Hartpury’s facilities as an Official Team Base to provide them with the ideal match preparation as they bid to kick off with a win.

The 31-man squad will arrive at Hartpury tomorrow morning before the city officially welcomes the team at a ceremony at Gloucester Cathedral in the afternoon.

“We’re no strangers to hosting international teams and we’ve been really busy preparing the campus for Scotland’s arrival, getting our pitches and gyms in peak condition, and they can be assured of a very warm welcome from everyone in the Hartpury community. It will be a fantastic experience for all of our new students to have them on site.

“I may be being a bit biased as a Scotsman but I hope that their preparation time here will help them produce a winning performance against Japan on Wednesday!”

Hartpury’s celebration of the Rugby World Cup began earlier in the year when they played host to a major primary school tag rugby tournament in April that was organised and run by Hartpury students. July then saw hundreds of people, from businesses to schoolchildren, visit the college to get up close and personal with the sport’s most famous trophy – the Webb Ellis Cup - as part of the competition’s trophy tour.

The USA national team will also be using Hartpury as their Team Base in October, when the Eagles will be preparing for their final fixture in Pool B, as they take on Japan at Kingsholm on Sunday, October 11th.

Hartpury will also have a quintet of former students hoping to shine at the World Cup with England flyer Jonny May, Canada’s Matt Evans, Georgia centre Merab Sharikadze and the Welsh duo of Alex Cuthbert and Ross Moriarty all set to play a part for their respective countries. 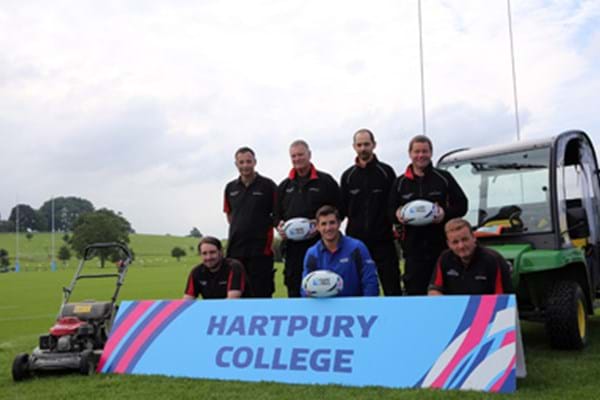