Hartpury made it three wins in a row when they met an Esher side that made them scrap all the way in a game that rarely sizzled, despite perfect conditions.

The result was a personal triumph for Hartpury full-back Gareth Thompson (pictured) who scored all of his side’s points - including three tries to put alongside a faultless kicking display - although it was eventually a good team effort in the second half that got them over the line.

The sides came into the game with similar records and separated by just one point. Hartpury were buoyed by last week’s good win at Coventry, but Esher were also confident after two successive victories.

Hartpury started erratically, as the kick off cleared touch and the resulting scrum had Hartpury back-pedalling alarmingly. Esher penalties followed, the second of which was in front of the posts allowing Paul Roberts to establish the early lead.

Centre Steve Leonard, always a key player for Hartpury, soon made his mark with a powerful run from deep in his own half, which created field position on the Esher 22. Hartpury launched a series of powerful thrusts toward the Esher line and, with the defence sucked in, the ball was moved wide to where Thompson was able to beat the cover tacklers for his first score.

The first half became a scrappy affair, frequently punctuated by the whistle of referee Dan Parrott and with re-set scrums being the abiding memory. Hartpury did create enough pressure to give Thompson the chance to add two well-struck penalties to his tally.

Esher were highly competitive during this period and were disappointed mid-way through the half, when they felt that they should have been awarded a try after they drove over through their big forwards. Most of their possession, however, came to nothing in the face of another disciplined defensive performance from the hosts.

Things improved after the break and now it was Hartpury who were enjoying the bulk of the territory and possession without being able being able to pierce a defiant Esher rear-guard. For a full 10 minutes they were camped in or around the Esher 22 but could not make the breakthrough.

And, as is so often the case, it was Esher who eventually marched Hartpury back to other end of the pitch, via a yellow card for the host’s Will Safe, and got their reward when Andrew Wright’s inside ball found Spencer Sutherland in support to dive over and narrow the gap.

Having eradicated some of the errors from their game, Hartpury were starting to put some decent rugby together and quickly re-established the advantage. Elliott Creed showed good pace and footwork on the wing before feeding Thompson for another finish, the full-back improving his own score with a stunning touchline conversion.

Esher kept fighting and a good break from the base of a midfield scrum by replacement half-back Calum Waters created acres of space for Wright to score in the corner.

But again, thoughts of an Esher revival were short-lived, as Leonard capped a fine performance by carving a huge hole through the centre of their defence. His perfectly timed pass released Thompson, who had the pace to complete his hat-trick under the posts.

There was still time for Hartpury to snatch the bonus point, but a late opportunity was spurned.

Hartpury Director of Rugby, Alan Martinovic, showed the levels that the team now aspire to when he said “We found it hard to maintain the standards that we set for ourselves in last week’s outstanding effort at Coventry.

We started with three mistakes in a row and it took us a while to recover. In the end it was good to record another win but the players need to remember that the gap between their best and their worst should be as narrow as possible.”

Mike Schmid, Esher’s Head Coach, was philosophical. “Both sides tried to play rugby but there were a lot of errors out there today. We didn’t feel as though we got the rub of the green in some of the decisions, but take nothing away from Hartpury - they are a good side and will win a lot of games this season.”

Next week Hartpury face the long trip north to Blaydon, before the next home game is the small matter of the Gloucestershire derby versus Cinderford. 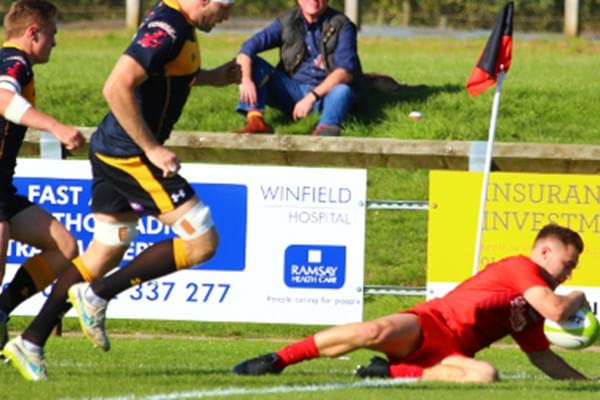