Gloucester Cathedral provided the spectacular setting as graduates from Hartpury’s Equine, Animal and Land, Sport and Veterinary Nursing were honoured for the successful completion of their degree programmes.

They were joined by their parents, siblings, Hartpury staff and governors and honoured guests for the ceremony, which celebrated all that they have achieved at Hartpury. More than 20 trophies and prizes were awarded to students who had demonstrated outstanding academic achievement and commitment to their studies.

Talented rugby player, George Boulton, this year won the coveted Malcolm Wharton Trophy for the best academic performance by an Academy Student. George studied for his degree in Agriculture alongside playing at the highest level as an outside centre for England Students, Hartpury RFC and Hartpury’s university first team.

Since graduating, George has secured a post as a college Agriculture lecturer at Hartpury and is continuing to star for Hartpury RFC in National League One.

This year also saw England and Gloucester Rugby flyer, Jonny May, graduate from Hartpury with a BSc (Hons) in Sports Business Management, but unfortunately, the winger could not attend the ceremony due to his international commitments.

He’s likely to see plenty of another of this year’s graduates at Gloucester Rugby’s Hartpury training base. Thomas Reynolds, graduating from BSc (Hons) Sports Coaching, has secured a senior analyst post at Gloucester Rugby following work experience as part of his course.

Eleanor Harrod, the winner of the Peasebrook Veterinary Centre Trophy for the top Final Year BSc (Hons) Equine Science Student, has also been very busy since graduating. She fought off stiff competition to gain a place on the esteemed British Horseracing Authority Graduate Scheme and has been given a real insight into the racing industry at the top level.

A full list of the prize winners across Equine, Animal and Land, Sport and Veterinary Nursing is below.

Hartpury Principal, Russell Marchant, said: “The commitment and dedication shown by our students and staff is something I take great pride in. As always, I felt privileged to be able to share in this celebration of their achievements and I would like to congratulate them and wish them all good luck in their careers and further study.

“I would also like to thank all of our prize sponsors, who make it possible for us to reward those students who have truly excelled in their studies.”

At the close of the afternoon ceremony, Hartpury’s Veterinary Nursing graduates made their declaration to the Royal College of Veterinary Surgeons (RCVS) – a requirement of becoming a registered veterinary nurse with the RCVS. They were also celebrating the fact that they have all secured jobs in their chosen profession since graduation and successful formal recognition of our veterinary nurses to work in a number of European member states.

The World of James Herriot Ltd. Veterinary Nursing Award for the Veterinary Student who has demonstrated the most improvement throughout their studies -Heather Maria BLAIR 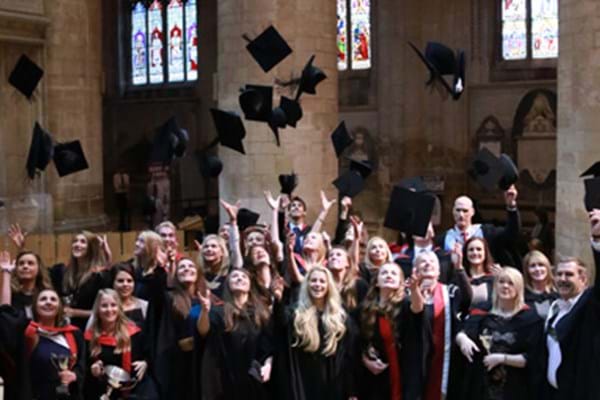