He may be gearing up to swim with sharks and battle giant swells and strength-sapping heat, but the biggest challenge facing Cheltenham’s Ben Hooper is all in his head, according to his Sports and Exercise Science team from Hartpury.

With the 2000-mile Atlantic swim now only months away, Hartpury’s Richard Collins, Tom Cresswell, Ben Drury and James McCarron, are stepping up Ben’s preparations as he bids to become the first person to swim the Atlantic Ocean from Africa to Brazil.

And with a funding shortfall forcing Ben to delay the start of his swim until January 2016, maintaining Ben’s mental space is proving a challenge for Hartpury’s Lead Sports Psychologist. The wider team is also now focusing on pushing him to the brink so that he is psychologically and physically strong enough to face the inevitable low points during his epic endurance challenge.

Ben will be swimming front crawl for up to 12 hours a day when he starts his ‘Swim the Big Blue’ adventure in Dakar Harbour in Senegal. The swim will take him through 30-foot surges in shark inhabited regions and he will encounter jelly fish, flying fish and a harsh Equatorial sun. He will also swim through “The Doldrums” – infamous for their stillness and humidity – and not forgetting the prospect of raging storms!

Rich said: “As Ben’s Sports Psychologist, it’s my job to find him a mental space and build walls around that so that he’s able to take on and hopefully succeed in a challenge this huge. There’s no blueprint; no one has ever done this before, and it’s a fairly new area of sports psychology too.

“It’s tough when there are so many distractions and worries away from his training, from commitments to current sponsors and securing new ones to media interviews. And of course everyone is different in terms of what they need to maintain that space, so as his Sports Exercise team, we have to find the approach that works best for Ben.

“We’re also at a point now where we need to start really pushing him to the edge and giving him the tools to cope with that. It’s only by finding his absolute limit that we’d be able to make the call about whether he should potentially stop when he’s out there.

“It’s great for our students that a Hartpury team is part of something so unique. They think Ben’s mad of course but they are really interested in the support we’re providing to him. And I’ll definitely be asking Ben to come in and deliver a lecture to them when he’s back!”

Ben’s swim will be broken down into two six-hour periods with two hours of rest on the support boat in between. Should Ben meet a smack of jellyfish during his swim, he could be forced to wear a ‘stinger suit’ to minimise the effect of stings and he will be equipped with a ‘Shark Shield’ device, which emits low frequency electrical fields. The support boat will also be equipped with a counter-shark device and shark-safe chemical repellents, along with a world renowned marine biologist!

Ben said: “It is high risk but there’s one word I won’t let people use when we’re talking about this challenge and that’s ‘impossible’. I can’t contemplate failure but of course it can be tough to stay on track mentally when there’s so many distractions creeping in, and the worry of needing to secure some additional sponsorship to get the boat ready in time for a January start.

“January is the absolute latest we can get going because I can’t afford to be swimming into Brazil when hurricane season hits! We need to pull in around 50k and that means I need to be giving up a lot of my time to trying to secure additional funding and sponsorship when I should now be focused entirely on my training.

“The brain does funny things when you’re swimming for that long; I’ve heard voices, felt irrational anger and neuroses and even smelled food. Rich helps me find mechanisms to cope with all those things, but also to combat the inevitable boredom and the distractions that prevent me from being in the right place mentally for my training.

“Listening to music is a massive help and Rich and I are currently working on putting together the ultimate soundtrack for my swim. It’s weird how some tracks can make me swim faster, and that isn’t always the right thing. Rich and the rest of the Hartpury team are absolutely fundamental to my expedition and I’m hugely grateful to them for standing by me.”

Ben has launched a final fundraising project for his ‘Swim the Big Blue’ mission - ‘Ben’s Miles’ - which allows people to ‘buy’ a mile of his Atlantic swim. In exchange for buying a mile, which range from £10 to £5000 for the final mile, supporters can interactively track Ben with GPS during his swim and support the expedition.

The ‘Swim the Big Blue’ challenge aims to raise £1million for three charities. Ben’s long-term ambition is set up a Sports Foundation, which will support wannabe adventurers looking for funding and grants to complete epic missions as well as promote water safety and campaign for free swimming for Under-12s in the UK. You can support Ben’s mission by buying a mile at www.bensmiles.co.uk 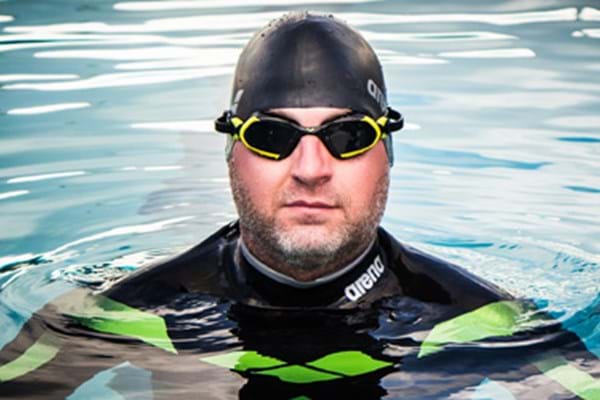