The Scottish invasion of Hartpury has spread to the college’s farming enterprise!

While the Scotland international rugby team have now moved on, having used Hartpury as an official Team Base earlier in the group stages of Rugby World Cup 2015, a new herd of Aberdeen Angus cross cattle has now been added to Hartpury’s farming operation to enhance student learning opportunities and boost business.

Hartpury has invested in the new cattle as part of its ongoing relationship with Sainsbury’s and the Blade Farming Scheme, which specialises in producing meat of the highest quality for the consumer.

And while the calves will be grazed away from the main campus at Hartpury’s new Okle Clifford Farm and at local farmer, Jim Warner’s, farm in Corse Lawn, students are already working closely with the animals.

Hartpury Agriculture lecturer, Philip Watson, said: “The aim is to weigh the calves on a monthly basis in order to monitor feed intakes, growth rates, feed efficiency and costs. These new arrivals also provide additional opportunities for both our college and university level students to experience and improve their handling and health observation skills.

“It also enables us to demonstrate an alternative farming and land use management method to students, showing them a semi-intensive grass-based system using calves from the dairy sector.

“These calves are reared on a forage-based diet and must be grazed for at least six months during their time here. They will then be finished on a cereal-based diet and leave the farm by 20 months of age. This is a method that students are most likely to encounter when they go out to work in the industry.

"Acquiring these Aberdeen Angus cattle also makes great commercial sense as a farm business as it brings in around an extra £100 per animal as part of the Blade Scheme, which focuses on the production of the highest quality meat that is tender, succulent and full of flavour.” 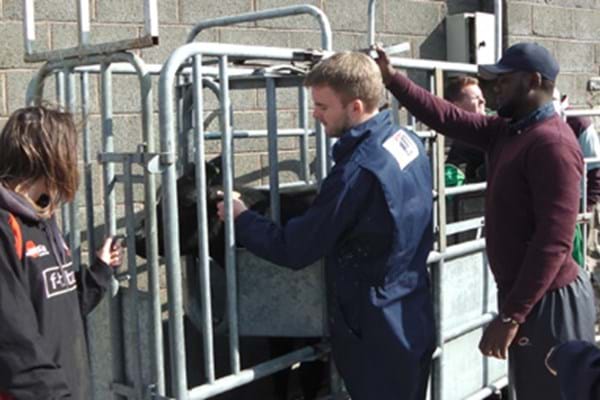