After a highly forgettable first period, when only a Gareth Thompson penalty separated the teams, Hartpury ran riot after the break, with winger Jonas Mikalcius helping himself to four tries and the visitors dominant in every aspect of the match.

The big pre-match news was the selection of Mat Protheroe at fly half for the college, the newly-named England Under-20 man making a welcome return, particularly in view of the long term injury to Jacob Perry.

Excitement at Protheroe’s return was tempered by the news that dynamic centre Steve Leonard was out with a knee injury.

A flat, dry pitch and no rain, despite the clouds, offered perfect conditions for expansive rugby.

In fact, the less said about the opening 40 the better, as both sides struggled to create anything. Henley saw plenty of the ball but lacked any kind of penetration, while Hartpury looked unusually out of sorts.

The set pieces were functioning with typical efficiency - Henley could barely collect their own line-out ball in the opening quarter - but Hartpury seemed unusually disorganised in possession. The situation was not helped when Protheroe, having had little opportunity to show his electric pace, was forced off after 35 minutes with a hand injury, not thought to be overly serious.

Everything changed immediately after the break. Jamie Forrester, on as Protheroe’s replacement, was able to fend off a tackle in midfield before making ground deep into the Hawks half. Drawing the last man, his well-timed pass gave Mikalcius, showing both pace and power, the opportunity to get outside his opposite winger and around behind the posts.

Minutes later, Forrester was heavily involved in try number two. He made another fine break through the Hawks’ midfield and it looked as though this time he might finish it himself.

He was brought down five metres from the line but the ball was recycled quickly for the industrious Will Safe to continue the attack, before flanker Seb Negri got the final touch in the corner, his full stretch being just enough to get the ball over the line.

Hartpury were now taking charge. A dominant scrum had the Hawks in all sorts of trouble and conceding a string of penalties. It was no great surprise that the next score should come from a driven line out, Tim Brockett finishing after a powerful 10 metre surge.

Mikalcius added his second when he had the strength to burst out of a double tackle and sprint behind the posts, before George Boulton got in on the act with another long-range effort. This time it was Elliott Creed who did the initial damage in midfield before releasing his fellow centre for a lung-bursting 35 metre run to the line.

All of the play was now taking place deep in Henley territory and the home side, reduced by a yellow card for repeated infringements at the scrum, were struggling to cope with the pressure. A quickly taken tap-penalty allowed Boulton to turn creator minutes later, when his cleverly floated pass gave Mikalcius the chance to finish in acres of space for his hat-trick.

With the clock moving into the final 10 minutes and the game effectively over, full back Thompson set off on a jinking run before releasing Mikalcius for the game’s final try.

The win was eventually every bit as comprehensive as the final scoreline suggests. In Polledri, Safe, Dancer, Negri and MacDonald, Hartpury had forwards who were completely on top in the loose while the front row, including the replacements, had a good day in the tight.

Behind the pack, the visitors had just the right combinations of guile, pace and power to take full advantage of an, ultimately, shell-shocked Henley defence.

The result means that Hartpury continue to lead National League One and extend their winning run to six matches. We welcome Darlington Mowden Park to the College next Saturday, before a rest week will give players and coaches the chance to take stock of what has been achieved in the season so far.

We would like to thank Henley Rugby Club for their excellent hospitality and look forward to welcoming them to the College later in the season. 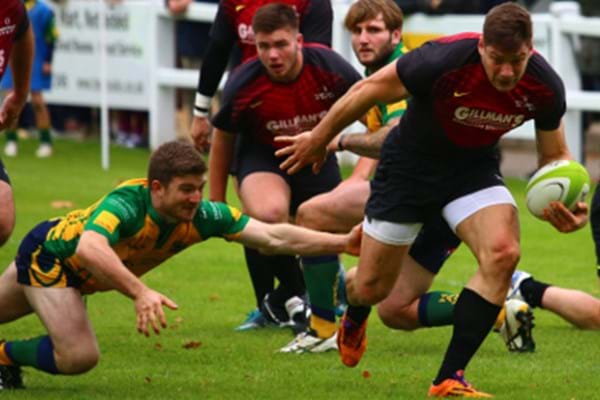