Hartpury Graduate Astier Nicolas claimed his maiden CCI4* title in his home country with a special victory at Les Etoiles de Pau over the weekend.

The BSc (Hons) Equine Management graduate, riding Piaf de B’neville, held off the challenge from Olympic Champion Michael Jung to take top spot for the first time at CCI4* level and also become the first home rider to claim the title since Nicolas Touzaint in 2007.

“It's very special to win my first CCI4* in France. It is a moment I have waited for a long time. I had two riders in front of me and didn’t think I would win,” said Astier, who was a Hartpury Equine Academy scholar.

Having found himself in third behind Jung and British rider Emily King heading into the showjumping, Astier was given a slice of luck when Jung’s leading horse failed at the final inspection, forcing him to withdraw. Despite still leading on his other horse, Jung’s showjumping penalty allowed Astier to leapfrog the German rider as he went clear.

With a final score of 38.5, Nicolas also became the youngest rider this year to win a CCI4* event, having gone clear in both the cross-country and showjumping in a field packed with world-class riders, including Mark Todd.

Although he won at CCI3* level at Blenheim, Nicolas’ previous best finish at CCI4* was at Pau back in 2012 when he finished sixth. The 26-year-old has also had a ninth place finish at Badminton Horse Trials and was a bronze medal winner as part of France’s team at the 2013 FEI European Eventing Championships in Malmö, Sweden.

Hartpury’s Equine Head of Department, Linda Greening, said “It’s great to see Astier doing so well at the very highest level and everyone involved with Hartpury Equine is thrilled for him. The victory must have been extra special on home ground.

Hartpury’s Vice Principal Higher Education, Rosie Scott-Ward, said: “Astier combined academic study with the highest level of competition – utilising the support of his academic tutors he managed to achieve in both spheres. He was a talented rider who clearly had immense potential and it is fabulous to see him achieve it. We wish him the best of luck for his future competitions and will continue to watch his progress very closely, especially when he’s competing here at Hartpury! It’s always a pleasure to welcome him back to Hartpury.” 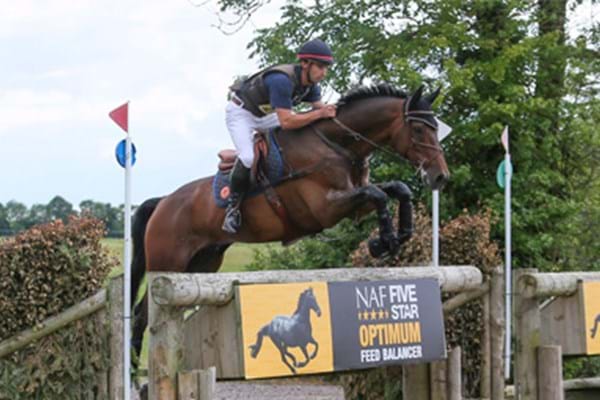