Hartpury, for the first time in their history, stand at the top of National League One after they eventually prevailed in a typical Gloucestershire derby. The match had plenty of blood and thunder and the College were pushed all the way by a Cinderford side that had the game in the balance on the hour.

Only a sparky and determined final quarter effort made the result safe, although Cinderford were still chasing a something from the match until the final whistle.

Hartpury were full of confidence, having put together four successive wins since their opening day defeat. Cinderford, on the other hand, were keen to show that their league position was not representative of their performances so far.

The game started well for the hosts as they burst onto the offensive straight from the kick off, with Cinderford scrambling to hold out wave after wave of Hartpury attacks. The visitors were not helped by the first of many lost line-outs and it was no great surprise when winger Kai Little was able power over in the corner with less than three minutes on the clock.

Minutes later Thompson extended the lead with a simple kick after Cinderford had infringed under their own goalposts and it looked as though the students might be in for a comfortable afternoon.

For the first quarter Hartpury were largely dominant. Despite being made to work very hard at the scrum, their almost faultless line-out and the industrious back row of James Stephenson, Jake Polledri and Will Safe ensured plenty of front-foot possession.

Half-backs Robbie Shaw and Jacob Perry used it well and the strong, direct running of centres Leonard and Boulton kept the Cinderford defence on their toes.

However, prompted by classy fly-half Callum Sheedy, the visitors began to claw their way back into the match. A missed penalty left the score unchanged at half time, but things might have been much closer had Cinderford been able to secure any decent line-out ball.

Hartpury suffered a blow late in the half when the talented Perry was forced to quit the action with a suspected broken jaw, but were fortunate to have a ready-made alternative as Thompson stepped up from full-back, Sam Westcott the replacement.

After the break and a missed kick from the usually reliable Thompson, it was the Foresters who enjoyed the early advantage, despite having to work around a still misfiring line-out. However their scrum was just fine and, from one attacking set-piece, wing Alex Pickersgill was on hand to finish under the posts from Sheedy’s excellent pass.

Things got better for Cinderford before the hour mark. With Hartpury starting to feel the pressure they infringed in midfield and a long range penalty from Wilcox had the scores level.

Cinderford appeared to have all the momentum at this stage but it was Hartpury, responding well to the challenge, who regained the initiative and laid siege to the line. Again prompted by the example of open-side Stephenson, Hartpury now recaptured their earlier fire.

Thompson restored some daylight with a penalty before a series of strong forward drives were rewarded when replacement prop Alfie Barron crashed through two tacklers to finish at the foot of the posts.

Better was to come for Hartpury five minutes later. Attacking from deep, the ball found its way to Steve Leonard. His powerful run was eventually ended, but not before his inside ball put athletic lock forward Joe Dancer into space.

He made ground before his excellent off-load out of the tackle was perfect for Robbie Shaw to go under the sticks to make the game safe.

The students now had visions of a possible bonus point but Cinderford, to their great credit, refused to let their heads drop.

In fact they finished the game on the offensive and there was a late try for Syd Blackmore, returning to the ground he left to join Bath at the end of last season. Unfortunately, it was not enough to rescue anything for the Foresters, despite a well struck conversion from Wilcox.

Hartpury coaches were pleased with the result and the quality of the tries, if not every aspect of the performance, whilst Nick Corrigan was left to rue his under-performing line-out and what he saw as some occasional defensive lapses.

Cinderford need to quickly address those issues, whilst Hartpury will be hoping that Perry’s injury is less serious than feared, with a tricky run of fixtures looming. 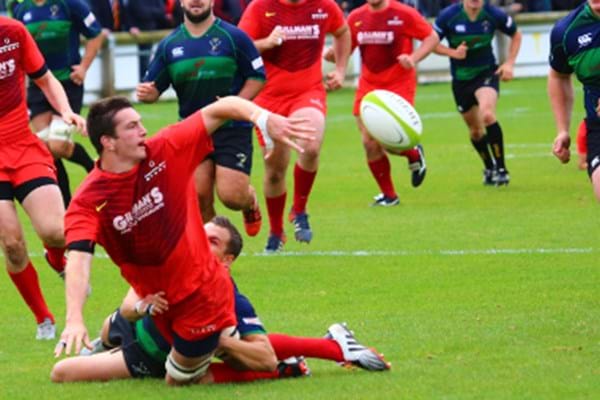