Three first half tries from winger Cameron Roberts were enough to set Hartpury's university 1st XV on the way to a 25-10 win over old rivals Cardiff Met, but not before they were made to work hard in defence...

Roberts' hat-trick was unusual in that all three, despite originating from different scenarios, were virtually carbon-copies involving long-range finishes.

The first try came early. Hartpury worked the narrow side from a defensive line-out leaving Roberts in possession with more than 60 metres to go. Although it's easy to say that he should have been stopped, Roberts showed good pace and strength to hold off both chasers and tacklers on his way to the line.

Tries number two and three both owed much to the running out of defence of full-back Charlie Hubert, the first of these in particular resulting from a good break from virtually his own try line to half way. Again Roberts proved to have too much for the visiting defence and finished well on both occasions.

In between Hartpury, although always looking to have something in hand, never really dominated. Cardiff Met enjoyed a good deal of territory and possession, usually keeping the ball tight among their big forwards, and got their reward on the stroke of half-time when awarded a penalty try as Hartpury disrupted a scrum near their goalposts.

They had earlier kicked a penalty, as had Tom Francis for the home team.

Ironically, Hartpury's scrum was to get them out of trouble on more than one occasion in the third quarter. Cardiff Met enjoyed their best spell of the game and had the hosts pinned in their own 22 for long periods, but Hartpury's ascendancy in the tight meant that they always had a 'get out of jail free' card. Just as well, in a match in which the home line-out had a distinct off-day.

Eventually the College worked their way up the pitch, the scrum again playing a large part, and were able to establish some concerted pressure. With 15 minutes to go, a ball won under the posts was spun right and the opposite winger, James Neal, was able to burst through the final tackle to score.

There was a sense that the floodgates might open at this point but, to their credit, Cardiff Met finished the game on the offensive, even though they could not collect any further scores.

A four-try win for the Red & Blacks was enough to pick up the bonus point and maintain the 100% record. The next challenge is away at Exeter, in a meeting of the only two unbeaten teams in Premier South A, and the College will be hoping to find that extra gear.

Also at Hartpury today, there was a good win for our BUCS 3rds in their Trophy knock-out fixture versus St. Mary's University from Twickenham. The final score was 36-19 although reports suggest that it was an entertaining, hard-fought match. The 3s can now look forward to having a tilt at Swansea University 1st XV in the next round.

Well done to both Hartpury teams on their wins today and thank you to both opponents for well-contested matches. 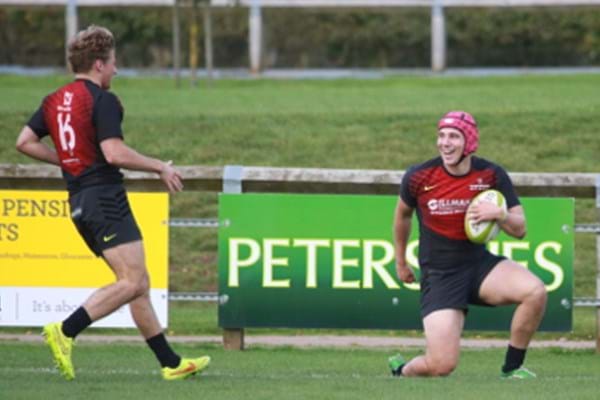