Former Hartpury student and Welsh Under-21s captain Sarah Llewelyn was named player of the tournament as she led her side to second place at the Netball Europe Championships in Scotland.

The 19-year-old saw her side finish second after pushing England all the way in the final, losing narrowly 63-56.

Llewelyn’s team opened the tournament with a 55-43 win over the hosts before following that up with a 58-27 victory over Northern Ireland to set up a final clash with pre-tournament favourites, England.

Despite a tight game, it was England who reigned victorious, leaving Wales to take the silver medal in the four-way tournament.

“The standard at the tournament this year was extremely high so it was amazing to come away with a silver medal,” Sarah said.

“Being named captain and receiving most valuable player was also a huge honour and even though we missed out narrowly on gold I’m so proud of the team for the effort they put it. We’ve shown today that we have a really strong squad moving forward and it’s really exciting heading into the world youth championships in a couple of years’ time.”

Having already picked up Welsh Under-19s honours, goal attack Llewelyn was part of the Under-21s for a second time, having featured as part of the squad during the 2014-15 season.

Llewelyn also made her Welsh senior debut back in December when she was called up to face England, where she found herself up against former Hartpury student, Sam Cook, as well as other experienced England internationals, Stacey Francis, Pamela Cookey and captain Jade Clarke.

The young star has previously played for Netball Superleague side Celtic Dragons alongside another former Hartpury student, Rosie Pretorius. 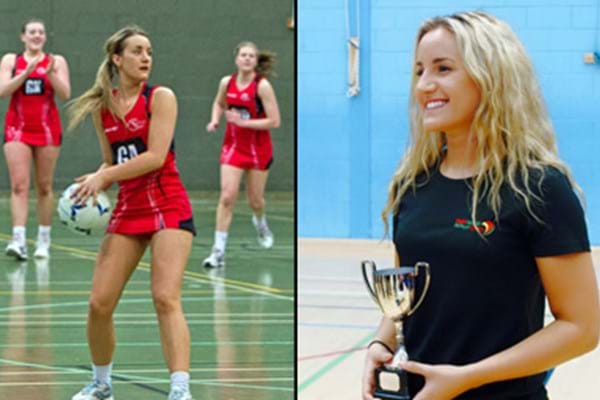