RFC go into this week’s away fixture at Henley’s attractive Dry Leas ground with a new pressure; as leaders of National League One.

Despite last season’s good showing, we were never anywhere remotely near to the top spot and we have to go back to the 2013-14 season and our most recent promotion before we encounter similar circumstances. And such is the nature of student rugby that very few of this weekend’s likely XV were playing for the RFC two seasons ago.

We need to go back a further year to find our most recent fixtures against the Hawks. In 2012-13, Hartpury finished third in League 2 South behind the two promoted sides, Worthing Raiders and champions Henley, losing both fixtures to the Oxfordshire side. In fact, we have yet to beat Saturday’s hosts in a league fixture, a draw late in the 2011-12 season being our best result so far.

Henley’s previous sojourn in National One was brief, lasting just one season, although their start this time around suggests better things in store this year. A couple of heavy defeats, to promotion contenders Rosslyn Park and Blackheath, have been offset by good away wins at Darlington and Loughborough and a comfortable home win over Wharfedale.

Their other notable achievement was to take a draw from their away fixture at early season pacemakers, Ampthill.

Both sides are likely to show changes from their recent victories. One definite non-starter for the Red & Blacks will be promising outside half Jacob Perry. As suspected, he sustained a fractured jaw in the win over Cinderford and has undergone an operation, although the length of his probable absence is not yet clear.

Henley also report that last week’s result at Loughborough came at a cost, with three or four players set to miss out against Hartpury. There should be at least one familiar face in the opposition ranks, as former BUCS and RFC prop Henry Sandys is now with Henley following spells with both DMP and Coventry. Tom Edgson is also dual registered with the club from Wasps, although the double AASE-winner has yet to feature this season.

The pick of the other games in this round sees Rosslyn Park, badly hit by injuries and on the back of two successive defeats, hosting second-placed Ampthill whilst Coventry vs. Fylde features two sides that have made stuttering starts after being strong in recent years. Ionians promising start will be fully tested at Esher, whilst Plymouth will no doubt be relishing their 820-mile round trip to Blaydon!

Meanwhile, how will Hartpury’s young side cope with the burden of leadership? We’ll let you know at 4pm on Saturday…

Saturday's game will kick off at 2pm.

(Picture: Brad Field leads a break-out during our last visit to Dry Leas, in the autumn of 2012, during Henley’s promotion season from NL2. Hartpury narrowly lost a hard-fought game to a late try, whilst reduced to 14 men. Yellow for Chris Fortey, if you can believe that…) 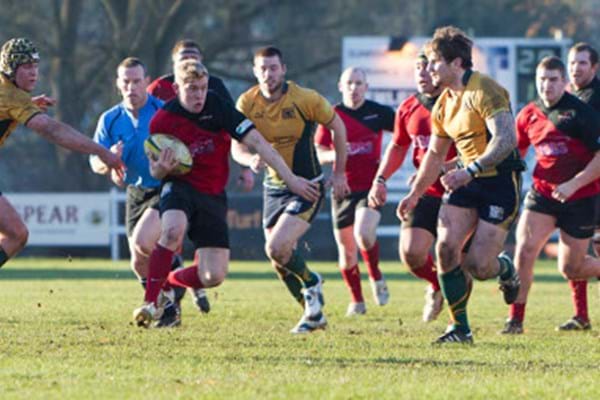