Striker White scored with his first touch of the game in the 85th minute as Hartpury’s continual pressure eventually told, securing a win that sees the team maintain their position at the top of the table as they look to secure the BUCS National Championship title for a second successive year.

Hartpury’s opponents were the first to threaten after five minutes when a free-kick from out wide saw a Cardiff Met player head his effort straight at goalkeeper Andy Hannah. This spurred Hartpury into gear and striker Scott Wilson saw his shot turned around the post by the goalkeeper.

In a half of few chances, the best opportunity fell to Hartpury in the 21st minute when a neat exchange between midfielder Sirdic Adjei-Grant and forward Mustapha Bundu saw Adjei-Grant bearing down on goal but his effort struck the foot of the post as the game remained scoreless.

The same two players combined again towards the end of the first half as Bundu’s cross from the left was slightly too high for the onrushing Grant, who couldn’t keep his header down. With the next attack, Bundu glided past the right back but saw his goalbound strike saved by the keeper.

The second half saw Hartpury begin to play with an increased urgency and five minutes after the restart, Bundu saw his free-kick from 25 yards sail just wide of the goal.

In the 60th minute, tidy interplay between the attacking foursome of Bundu, Wilson, Adjei-Grant and Amadi almost led to a goal and just one minute later a pass from Benn saw Adjei-Grant burst through the defence again, only for a last ditch tackle to prevent him from taking a shot at goal.

Amadi was having an impact on the game and should have put Hartpury a goal up after another superb run from Adjei-Grant saw him cut the ball back towards the forward, who blazed his effort over the bar from six yards out.

At the other end, Cardiff Met almost went a goal up against the run of play but proceeded to slice their shot over the bar after a cross from the right byline.

With 15 minutes to go, Hartpury centre half Spencer Hamilton produced a fantastic sliding tackle to snuff out another counter by their Welsh opponents, while his defensive partner, Jordy Nkunga, saw his header from a corner go over the bar as the game entered the last 10 minutes.

In the 83rd minute, Hartpury made their final substitution with White coming on for Wilson as they continued to search for the decisive goal in the game.

And White broke the deadlock just moments later when a drilled ball across the penalty box from Bundu found the goalscorer free at the back post to provide the finish and put Hartpury a goal up. 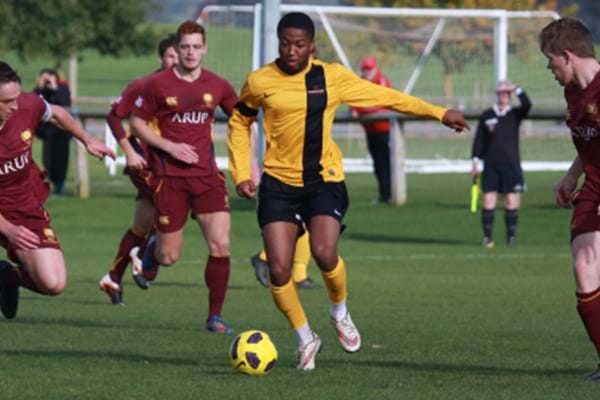