While Monkeys and dolphins may generally be considered nature’s biggest brainboxes, a Hartpury duo have conducted research that shows a type of rodent could also be worthy of a mammal mastermind title.

Hartpury graduate Oliver Beasley and Hartpury lecturer Dr Tamara Montrose recently presented their research showing that degus can discriminate between different quantities of items at the Association for the Study of Animal Behaviour (ASAB) summer conference - an international event showcasing animal behaviour research from around the world.

Degus were shown to display quantity discrimination. That means that when they are presented with a choice between more or less, they will more often than not choose more. This trait has been noted in various studies involving primates, birds, amphibians, fish and insects but this is believed to be the first study of its kind to test degus.

During the research conducted by Oliver and supervised by Tamara, it was noted that when the degus were presented with choices of more or less using 5mm carrot pieces in separate pots, the degus unanimously chose more when presented with 0 versus 1 and 3 vs 4. They also showed a preference for greater quantities when given a choice of 1 vs 2 and 3 vs 5.

“It’s a really interesting study as the degus show abilities which are comparable to what has been found in human infants and rhesus macaques,” Tamara said.

“Ollie completed the study during his final year as a Bioveterinary Science degree student here at Hartpury and it’s a testament to his hard work that the research was accepted to be presented at an international conference. I’m hoping to build on the study in the future to further explore the numerical abilities of degus.” 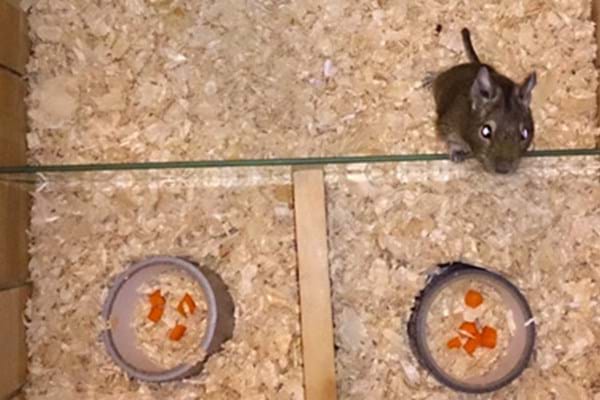