In a tense top of the table clash at the Rectory Field, a last minute penalty try meant the oldest club in world rugby, Blackheath RFC founded in 1858, knocked the youngest team in the National League 1, Hartpury RFC founded in 2004, off the top spot and into third position in the table.

Going into the game both teams had enjoyed a seven match winning streak, only losing their opening fixtures of the season, occupying the top two spots in the table. Travelling to east London Hartpury would certainly face their sternest test of the season, looking to make amends for last season’s defeat which saw a more streetwise Blackheath outfit snatch a victory in the closing minutes.

A strong breeze and wet conditions underfoot would provoke a set-piece ravaged game, which would be won at close quarters.

In the early exchanges only a Frederick Gabbittas penalty from 40 metres separated the teams, after both teams struggled to string any continuity together, and keep hold of the ball for any length of time.

Starting to settle into the game, several Hartpury attacks on the Blackheath line were halted by a committed defence as the university outfit pressed deep into try scoring territory, Blackheath defending Hartpury’s driving line-out desperately.

However, on the 30 minute mark Hartpury’s pressure told, with Daniel Thomas burrowing over from a driving line-out that was this time too powerful for the Blackheath defence, this giving the away team a 3-5 half-time lead after Gareth Thompson pushed the conversion wide in telling conditions.

A stop-start half was broken up by numerous handling errors from both sides, bringing the battle of scrum to the forefront of the game. Hartpury being the only team to attempt to attack with any menace with ball in hand and spread their play took a deserved narrow lead into the break.

Buoyed with the wind behind their backs after the break, a priority for Hartpury in the second-half would be to gain vital field position that could enable to add to them add to their lead. Their plan was disrupted when Gabbittas kicked the capital club into a 6-5 lead with an easy penalty following a yellow card to Hartpury scrum-half Robbie Shaw for a deliberate knock-on.

Hartpury hit straight back, Thomas grabbing his second, cutting a superb line to charge over from 25 metres out. Gareth Thompson added the extras.

Managing the sin-binning maturely, a fully complimented Hartpury then controlled both possession and territory, in a spell that saw them look dangerous attack and solid without the ball.

Leading 6-12 with time running out, Hartpury seemed to have weathered a late Blackheath onslaught, before a series of penalties gave Blackheath crucial field position to steal a last-grasp victory.

After defending their try line for 79 minutes a Blackheath driving line out destined for the Hartpury line was stopped illegally, leaving the referee to award a penalty try, delivering a bitter ending to game and Hartpury with only a losing bonus point as little reward for their valiant efforts.

With only time left for the restart Blackheath claimed the spoils 13-12, the referee’s final whistle generating déjà vu for the Hartpury players after a last minute loss in last season’s corresponding fixture.

Hartpury must now regain focus with another side prompting the top of the table, fifth-placed Ampthill RFC the visitors to campus next week. 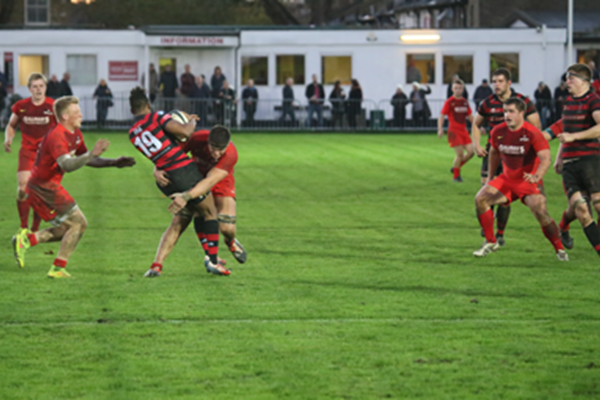