On a wet and windy afternoon, the conditions won the day as both sides struggled to play open rugby.

Hartpury eventually prevailed, mainly due to a moment of individual skill from Scotland Under-20 scrum half Ben Vellacott (pictured), a rock-solid set-piece and, even on this day, a watertight defence.

Loughborough showed plenty of enterprise and generally had the better of things at the breakdown, but perhaps tried to overplay on occasions when a more direct approach would have brought greater benefits.

Hartpury had the unusual luxury of a largely unchanged team. Having made his debut off the bench in the previous week’s dismantling of Wharfedale, former student and Cinderford stalwart George Evans got a start in the back row. Steve Pape moved to bench to allow Tom MacDonald into lock forward.

Going into the game as leaders and with good recent form, Hartpury would have wanted to play the brand of rugby which has served them well this season, combining dominance up front with pace and power in the wider areas. However, the weather gods frustrated them on a day when handling was difficult.

More to the point, they had a set of opponents that were in their face from the first whistle and all of the early possession and territory was with Loughborough.

In fact, it was no surprise when the home team, whose discipline has generally improved this season, lost hooker Will Tanner to a yellow card midway through the first quarter – Will Edwards having no trouble slotting the resulting kick for the lead.

Hartpury did manage to work their way into the game and were more than equal in the second quarter, but a lone Gareth Thompson penalty was their only reward as the half ended all square.

There was a similar pattern after the break, with neither team able to build any sustained pressure. Hartpury did eventually get the breakthrough when Vellacott, fed by number eight Rhys Oakley from an attacking scrum, played an inch perfect chip over the Loughborough defence and won the race to touch-down under the posts.

However, the visitors were quickly back into the game. Outside half Edwards launched a beautifully weighted cross-field kick and winger Yiannis Loizias gratefully accepted the invitation to pick up an unconverted try.

Hartpury were not to be denied and the final twenty was arguably their best spell of the match. Shortly after the Loughborough score, Thompson had another straightforward kick to ease his team further ahead and the game ended with Hartpury camped in the Loughborough half.

Conditions dictated that the game is unlikely to be remembered as a spectacle, but this was another valuable win for the College, who remain top on points difference from Richmond, who picked up a maximum haul at home to Wharfedale.

Blackheath remain third by virtue of yet another late try that gave them not only the win but also a bonus point at Hull Ionians, while Esher had too much for visitors Cinderford.

Rosslyn Park slipped up again, away to a Blaydon team who have battled their way upwards from the foot of the table and Ampthill’s early season form appears to have deserted them, as they lost at Plymouth.

Mowden Park claimed the spoils, just, at Fylde while Coventry’s revival continued as they consigned Henley to yet another defeat.

Hartpury now have the challenge of two consecutive Saturdays in south west London – at Rosslyn Park and Richmond respectively - before returning to the College for the final game before Christmas, versus Plymouth Albion. 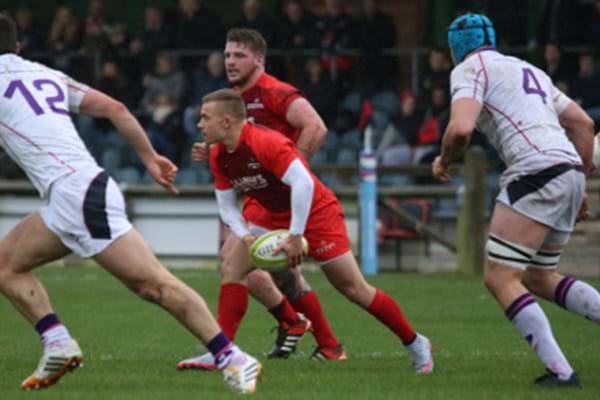