Hartpury footballers are aspiring to achieve the American dream with a host of former student starlets shining at colleges across the nation.

And none more so than Lewis Hilton, who is playing a major role for the Young Harris College Mountain Lions in the state of Georgia.

Hilton spent two years at the college from 2010, where he led the side to success as they secured the English Colleges Football Association (ECFA) National Championship in both seasons.

He said: “My years at Hartpury were two of the best years of my life. The experience was invaluable and throughout my time there, the coaches had a significant influence on my football development.”

After leaving Hartpury in the summer of 2012, Hilton ventured across the Atlantic to start his American dream and the 21-year-old has not looked back.

He immediately began showing the talent that saw him guide Hartpury to honours by securing the Peach Belt Conference’s Freshman of the Year award in his first season and the centre midfielder was named in the All-Conference second team while also being named in the National Collegiate Athletic Association (NCAA) Division II All-Southeast Region third team.

Hilton added: “It took me a little while to adapt to the different climate out here but it’s been a great experience. The standard of football is very competitive and the game is growing in popularity every year. Players from all over the world are being recruited to play at college level.”

One of those recruited this year is former Hartpury student, Josh Poole, who has joined Hilton at Young Harris College.

Poole, who captained Hartpury’s Under-19s first team to ECFA National Championship success last year, is not the only Hartpury talent to make the trip across the pond this summer with university footballers, Mitch Botfield and Tom Seery, joining the Lenoir-Rhyne Bears. Both players were signed to the programme by another former Hartpury student, midfielder Jack Winter, who is now assistant manager at Lenoir-Rhyne, based in North Carolina.

All three players will be looking to make as big an impact as Hilton, who is now in his fourth and final year at Young Harris.

And the playmaker is potentially looking to emulate fellow former Hartpury student David Accam, who is currently starring for MLS side Chicago Fire. The forward who joined Chicago last December has made an instant impression in the league, leading Chicago with 10 goals while also winning their Most Valuable Player award, and Hilton stands an outside chance of being selected to enter the 2016 MLS Draft in January.

“It would be a dream to be selected for the MLS Draft but it is quite rare that international players are selected in that way,” said Hilton.

“Right now I’m concentrating on my final season at Young Harris College but I’ll deal with everything when the time comes. I have enjoyed every minute of my time in the USA and it has given me a taste of what I want to pursue after my degree.

“My long-term aim is to play football to the highest standard I can and once I graduate there will be a few opportunities for me to play in the US and Europe, but it will be down to me to make the most of these chances. It has always been my dream to play football professionally and, if I can fulfil that dream, I will be ecstatic.” 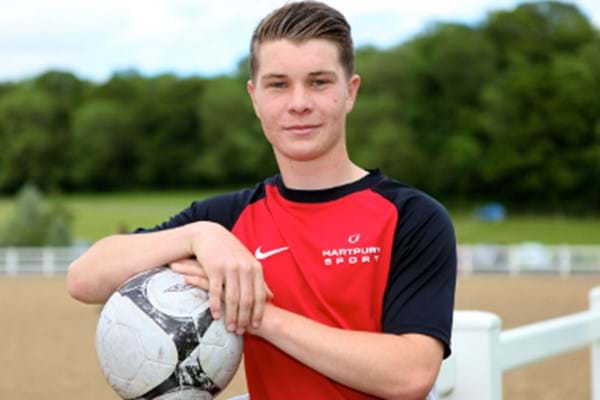