As the weather turns colder, the prospect of going into hibernation may seem pretty appealing, but winter is far from a cosy bed of brambles for Hartpury’s hedgehogs!

One Hartpury lecturer is playing a leading role in an important national study aimed at finding out more about the over winter behaviour of hedgehogs; drawing some strange looks as she explores Hartpury’s 360-hectare estate.

Lucy Clarke, lecturer in animal behaviour at Hartpury, has been monitoring hedgehogs on the campus since starting the study in August. Ten have been fitted with radio-tracking devices, meaning Lucy can find them day and night carrying what looks like a television aerial!

The study, which is being jointly funded by the People’s Trust for Endangered Species and the British Hedgehog Preservation Society, will run until April 2016 to cover a full winter’s hibernation cycle. It focuses on the behaviour of hedgehogs over winter in arable farmland, looking at patterns of nesting sites and the hedgehogs’ survival prospects.

“I can’t believe how interested everyone at Hartpury has been in my study,” said Lucy. “People are calling and e-mailing me all the time about hedgehogs they have spotted around the estate. We’ve found them all round the campus, from the gatehouse to the farm and right up to Rudgeley Wood. They particularly like the areas around student accommodation it seems.

“It is early days in the study but what has become apparent is that we have a large, healthy population here that is breeding well. I’ve found a lot of juveniles. That could be partly down to the mild weather but I think the regularity of mowing here helps too! It provides materials for nests and churns up food sources for them. There are also lots of patches of bramble and nettle in quieter corners of the campus, which are particularly good for hedgehogs.

“Through tracking the hedgehogs, I’m able to regularly monitor their weight, body condition and their survival. Prior to hibernation, I’ve been looking at where they go and where they build their nests, and then during hibernation, which is between November and March, I’ll be looking at their nesting sites, monitoring survival rates and, if possible, recording cause of death. Hibernation is a high risk time for hedgehogs, so it’s important to know why they die.”

Hartpury students have also been involved in surveying and tracking, with two of them using it as the focus for their final year dissertations. Animal Science degree student, Casey Brown, is looking into the most effective bait for hedgehog surveying – using cat food, hedgehog pellets and hot dog sausages - while Animal Behaviour and Welfare degree student, Frankie Emmerton, is investigating the materials hedgehogs use to build nests in relation to what is available to them in their environment.

Lucy is completing the study as part of her PhD as a student of the University of Reading, although the project is being led by Nottingham Trent University, which is the other site involved in the study.

Lucy added: “By having a better idea of hedgehog movements during hibernation, where they are likely to nest, the materials they prefer to use for those nests and causes of death, we’ll be able to do more to conserve habitats and resources and protect hedgehogs from threats, hopefully helping with their long-term conservation.

“For example, we can advise farmers on how farmland can be better managed for the benefit of hedgehogs, for example encouraging the use of field margins, hedgerows and wild patches, which also help lots of other British wildlife species.” 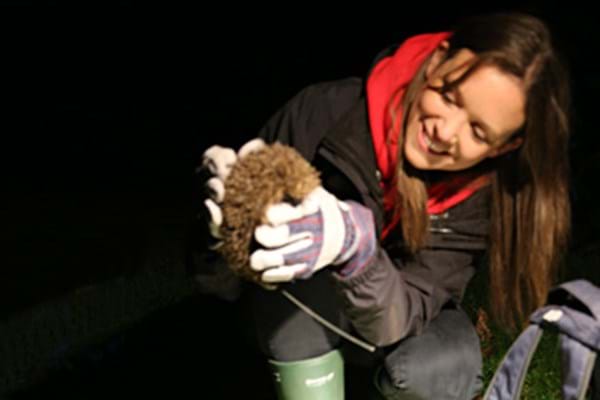