A former Hartpury student who weaved her magic on the rugby pitch at the college has put her sporting and university dreams on hold to embrace an elephant education mission on the other side of the world.

Gloucestershire girl Molly Birchmore, 20, studied for her A-levels at Hartpury while she was on the Advanced Apprenticeship in Sporting Excellence women's rugby programme at the college.

She had previously studied at Cotswold School in Bourton-on-the-Water. When she left Hartpury in 2014, she opted to go travelling in Asia rather than head straight to university.

Little did she realise that decision would change her destiny - one that has seen her working with a world renowned elephant vet and educate people from all walks of life about her cause - from poverty-stricken mahouts to Government officials.

"I know it's not quite the expected path after AASE but I have always been passionate about elephant conservation and that was an interest I was really keen to pursue when I left Hartpury," said Molly.

"Over New Year 2015, I volunteered for a few weeks at Elephant Nature Park (ENP), Chiang Mai, Thailand. It was there that I realised that I had to play an active role in elephant conservation but I didn't want a tourist volunteering experience.

"Not being a vet has made it pretty tough to try and get volunteering and work experience opportunities. After sending countless emails to all sorts of charities and organisations over India with no success, I contacted ENP’s French online ambassador.

"She suggested I contacted Dr Rinku Gohain and within the exchange of four messages, it was arranged; I would go to Bihar and assist him at India’s biggest cattle fair, the Sonepur Mela."

In the past few weeks, Molly has been working with the world renowned elephant vet at the Sonepur Mela in India.

She added: "My work was to run mahout (elephant carers) workshops and collect data from vet assessment, including everything from height to more complex aspects, including recording the presence of clinical problems such as oedema, foot disease and eye infections.

"Many mahouts don't have a formal education, nor do they received an education on how to care for their elephants. For example, the bull hook should be used only for self defence but many use it as a training tool.

"A good mahout will have such a good relationship with their elephant that they should only have to ask and the elephant will carry out the command. The lack of human education is what causes incidences of serious abuse. It was our job to support the mahouts to create a relationship with their elephants and I was really impressed with how engaged they were with the training.

"At the fair, the trade of cattle, horses and dogs is legal but the trade of elephants and wild birds is illegal. The Bihar State Government officials that I addressed want to revert the laws so that elephant trade can resume, and I had the opportunity to present to them at official meetings and conferences as part of our bid to change their minds.

"Bihar state is the only state in India where elephants are used as status symbols and reverting the laws could mean people purchasing these elephants with no idea how to keep them, which would increase incidences of abuse.

"It's certainly been a far from glamorous way to go travelling! I've been living in a very traditional and basic style tent on a bed of straw and we ate rice and lentils for every meal.

"But exposing the plight of captive and wild elephants is vital and I want to continue to do everything I can to ensure elephants are not abused or exploited."

Molly is now making plans to be involved in a similar programme of events in Jaipur in February. To find out more about the conservation work Molly is doing in Asia, you can read her blog at https://molbtravel.wordpress.com/2015/12/02/sonepur-mela-the-elephants/ 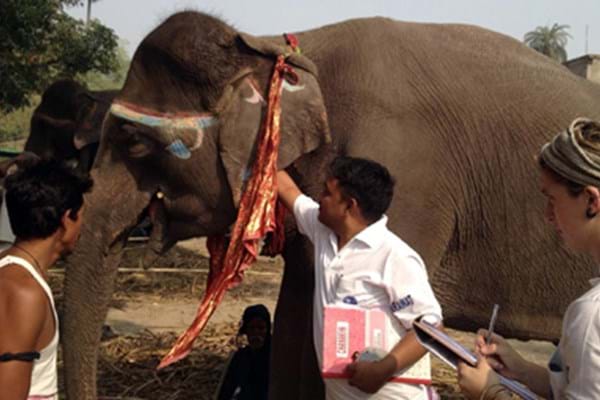