Hartpury’s golfers will be looking to pick up where they left off in the New Year after producing a series of strong performances to start their season off in style.

Hartpury currently hold top position in both the gross and nett divisions of the British Schools and College Tour (BSCT) and Intercollegiate Tour (ICT) respectively.

A host of Hartpury’s fledgling talents are also continuing winning ways away from the college with Hartpury golfer Nick Ramshaw securing the Gloucestershire Golf Union Under-18s Order of Merit Jeff Hall Trophy and Rowan Warren claiming a multitude of awards at his home golf club.

Hartpury could not have asked for a better start to the season with the A team top of the gross division, while the B team are top of the nett division in the BSCT. Hartpury golfer Kobe Adams is also tied for first place in the individual Order of Merit with the 17-year-old producing a string of strong showings throughout all four rounds.

The college are also setting the pace in the ICT with the A team top of both the gross and nett divisions, as well as the B team sitting in second place in the nett division after two rounds of action.

Alex Chalk is currently third overall in the Order of Merit, making him Hartpury’s highest ranked player, while Caitlin Evans-Brand is well placed in second position in the girls’ competition.

Chalk, who last year became the college’s first Scotland international when he represented his home nation in a fixture against England Schools, took part in the same fixture this year, but this time representing England! He won both of his matches.

Nick Ramshaw was able to claim the Jeff Hall Trophy after a fourth place finish at the final event of the season saw him take the Gloucestershire Golf Union title by 105 points from his nearest competitor, who was former Hartpury student Jamie Andrews.

And another Hartpury student, Rowan Warren, was the star of the show at the presentation night at Fairwood Park Golf Club, Swansea. Rowan won just about every major trophy that the club could offer, which included Club Champion and the Golfer of the Year awards. The 17-year-old now plays off a one handicap and managed to reduce this by an impressive three strokes over the past eight months.

Richard King, who manages Hartpury’s golf programme, said: “It’s been a great start to the season for all of our teams and we are in a really strong position as the competitions begin to reach the business end from the beginning of next year.

“It’s also fantastic to see members of the team produce strong performances and gain recognition outside of the college within their own counties and clubs and hopefully they’ll be able to build on that in 2016.” 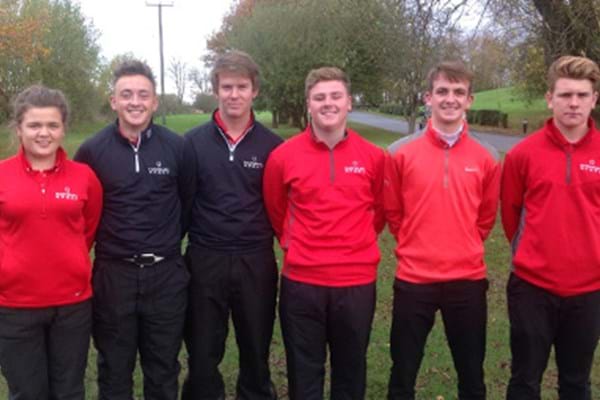