A Hartpury student is setting her sights on competing at the prestigious Asian Games in 2018 after a string of successful performances.

Chia-Ying (known as Jiayin) Chiang, 18 , from Taiwan, is hoping to represent her home nation with the help of her father – a National Games medallist many times over – at the event in Indonesia in 2018, after impressing during the National Games 2015.

The Access to Higher Education Land-based studies student finished third in the 130 to 140 centimetres showjumping team competition at the Games – the biggest show in Taiwan. She was representing New Taipei City on her horse, Gustav, and now has her sights firmly set on following in her father’s footsteps.

The Asian Games is a multi-sport event held every four years among athletes from all over Asia. The Games are recognized by the International Olympic Committee (IOC) and are described as only second to the Olympics for being the largest multi-sport event in the world.

The young showjumper, who is hoping to trial for Hartpury’s Equine Academy, also experienced success in 2013 at the Taipei National Games, where as the youngest rider in the competition, she finished in first place in the 130cm to 140cm team competition. She backed up that impressive team performance with a respectable sixth place in the individual event.

Jiayin said: “Coming to Hartpury has already been fantastic for my development and I’m now setting my sights on securing a place in the Equine Academy for next year, when I also plan to start a degree course at the college. It’s an amazing environment to be in and one where I can further my studies and my riding.

“I’m currently bringing on my new horse, a seven-year-old mare called Damville, and having her with me at Hartpury will be fantastic in helping us prepare for major competitions, including potentially, the Asian Games.

“I chose to come to Hartpury because the facilities are awesome and the university centre offers such a vast amount of exciting equine courses to choose from. The people on campus are really nice too – it was definitely the right decision to come and study here!” 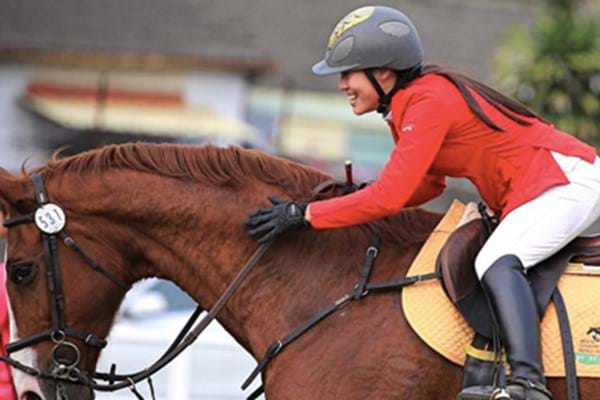