Hartpury students filled their (yellow welly) boots with knowledge to keep them safe on the farm.

From lost limbs to cow crushes and electrocutions, around 60 Agriculture and Farm Mechanisation students were presented with four scenarios they could encounter on their own farms or when they head out to work.

The full day Farm Safety workshop is part of the national ‘Yellow Wellies: Who would fill your boots?’ campaign being delivered by the Farm Safety Foundation - an independent charity set up by NFU Mutual in 2014. It is being delivered at colleges and at shows throughout the UK, with the aim of reducing the number of fatal and serious injury accidents occurring to young farmers and their families.

While UK farmers are among the best in the world, farming remains one of the UK’s most hazardous industries; accounting for 1.5% of workers but 15 to 20% of all worker fatalities (Health and Safety Executive).

Helen Griffiths, Hartpury Agriculture lecturer, said: “Young people are such an important target group from this farm safety message as the future of the industry.

“As technology advances within farming, the risk of accidents can actually increase. While the safety of machinery and equipment has improved, the fact that machines can do so much more can make people complacent.

“Given that farms are increasingly reliant on technology to be efficient and profitable and that compliance with health and safety legislation is more challenging than ever before, we already focus a significant amount of our teaching and learning on this area.

“It’s fantastic to have an outside organisation come in to help us deliver this vital message though and for the students to face scenarios they could come across on their own farms when they go home for Christmas or in their workplaces in future.

“And of course, the likelihood is that if they did face an incident like this, they would be on their own and, given the rural location of many farms, they may not have a phone signal. So they need to know the most effective way to respond.”

The scenarios at Hartpury were led both by College lecturers and by representatives from NFU Mutual's Risk Management Services. At each one, students were asked how they would establish what had happened and what actions they would take. They were then given information about the best way to react to keep themselves as safe as possible and achieve the best outcome for the casualty.

While one scenario presented the students with a casualty* who had been electrocuted hitting a power line with a JCB, another focused on a casualty who had lost their arm in a Power Take Off (PTO) – the machine that drives the implement on the back of a tractor. In this case, part of the guard was missing and it had not been turned off prior to adjusting the setting.

At another scenario, the students found a casualty lying unconscious with a needle in their hand and had to assess the situation. The casualty had been kicked and crushed by a cow while delivering a routine antibiotic injection and had internal bleeding and the students were asked to imagine that cows were still in the pen, potentially stressed.

In the final scenario, students came across a casualty that had cut off a limb in a chainsaw accident. All Hartpury students are supported to achieve their chainsaw ticket (licence) at the college, which ensures they can successfully and safely operate a chainsaw in a range of situations and are insured to do so in the workplace.

Helen added: “Farming has changed such a lot. It’s not just a case of turning up and being able to drive a tractor any more. It’s a very competitive industry our students are going into.

“With more and more people wanting jobs in the land-based industries, they need to make sure they stand out from the crowd when they leave us. That’s why it’s so important to keep them informed about the latest health and safety legislation and give them the skills and knowledge to be compliant with that legislation and the many farm assurance schemes farmers sign up for to boost their profitability.”The Farm Safety Foundation was established by NFU Mutual in 2014 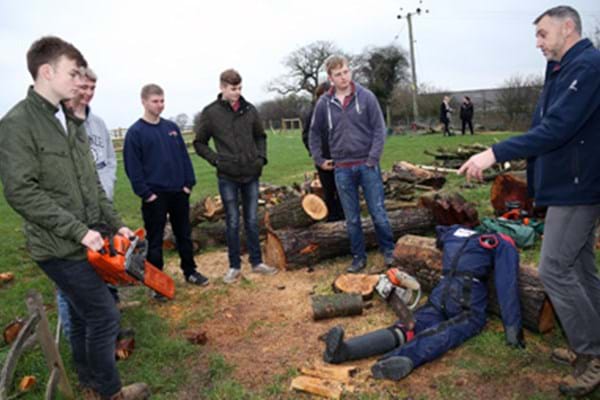