Faced with an opportunity to make inroads at the top of National League 1, Hartpury produced a disappointing display that yielded nothing, against an Esher side that they had beaten comfortably in each of their last three meetings.

True, only a late penalty from Esher’s Ali Chisholm denied the visitors a losing bonus point, but even that would have been more than Hartpury deserved from a performance that only showed signs of life once the game was lost.

With competition for places across the squad, it’s hard to identify why so many players failed to produce something more convincing on a day that was tailor-made for the all-action style that Hartpury specialise in.

Despite being bitterly cold, this was the first game in weeks played on a dry, firm surface and under clear blue skies.

Mat Protheroe was unavailable, meaning that Jacob Perry moved to full-back and Lloyd Evans resumed his duties at outside half. Ex-Esher man Robbie Shaw was again preferred at scrum-half, having played well in the previous week’s win over Coventry.

Athletic lock forward Joe Dancer was a casualty from that match, meaning that Rhys Oakley started in the engine room with George Evans at Number 8.

The first half barely registered on the excitement scale from a visiting perspective, as Esher were quicker and more assertive in almost every aspect of the play.

Winger Spencer Sutherland put them ahead within the first ten minutes when he was able to finish after kicking ahead. Paul Roberts added the extras from the touchline, but was to go on to spurn easier chances as Hartpury leaked penalties throughout the match.

Having weathered the early Esher storm, the visitors had opportunities to impose themselves on the game but, frustratingly, were unable build any periods of serious pressure. The scrum was regularly penalised by referee Warburton and the line-out, so often a source of strength, was undermined by some inaccuracy from hooker James Stephenson.

Stephenson is frequently outstanding in loose play but, as a young open-side reinventing himself in the middle of the scrum, this is one aspect of his game that he will need to work on.

With a 7-0 deficit, the half-time whistle came as something of a relief. Surely the team would raise themselves in the second period?

Well, not really. The half began in much the same fashion as Roberts was presented with an early opportunity to extend the home advantage. He contrived to hit the post from dead in front but Hartpury were quick to allow him another shot and this time he made no mistake.

Minutes later another penalty was spiralled into touch, deep in the visitors’ 22. With Hartpury defending their line Steve Pape, a first half replacement for George Evans, was sent to the bin and Esher took full advantage. A drive from the resulting line-out was finished by lock Ian Kench and Hartpury were more than two converted tries adrift.

Penalties continued to be conceded and whilst Hartpury might argue that Esher seemed to get most of the key decisions in their favour there was still a level of profligacy that would hurt any team. With an hour on the clock, Roberts was able to kick another and there was a distinct chance of Hartpury getting ‘nilled’ for the first time in many a season.

Finally, with the game deep into the final quarter and Esher down to 13 men from two cards of their own, they managed to bring some pressure to bear.

With replacement scrum half Ben Vellacott looking lively the Esher defence became stretched. On 70 minutes his quick tap put Des Merrey into space and the prop made good ground before timing his pass to winger Jonas Mikalcius. He went powerfully outside his opposite man to score and Lloyd Evans’ conversion was well struck.

It was important for Hartpury to score next, but yet another penalty gave Roberts the chance to collect three points and restore some calm to Esher ranks.

With time almost up, it looked as though the visitors had snatched an unlikely point. Evans’ accurate cross-field kick had Esher winger Olima at full-stretch under pressure from Mikalcius. He could only palm the ball down and Steve Leonard was on hand to score behind the posts.

But, typically, there was still one more penalty to be conceded and Roberts’ replacement, Chisholm, made no mistake.

Frustratingly, a win would have put the College right on the heels of leaders Richmond who were held 21-21 at Coventry while second-placed Blackheath’s game at Darlington was one of two games that fell victim to the weather in the north-east (Blaydon v Loughborough was also off).

There was another draw at Cinderford where both they and Wharfedale picked up three points from a 26-26 nail-biter, although both teams remain locked in the bottom three along with Henley, who went down 16-38 at home to Ampthill. Big winners on the day were Rosslyn Park, who finally got their act together with 49-0 thumping of Ionians and Plymouth Albion, whose 26-38 victory at Fylde was all the more remarkable due to the fact that they were 26-10 down at the break.

Hartpury must now re-group before next Saturday’s visit from Blaydon (2.30pm).

We would like to thank Esher for their outstanding hospitality and wish them well for the remainder of the season. 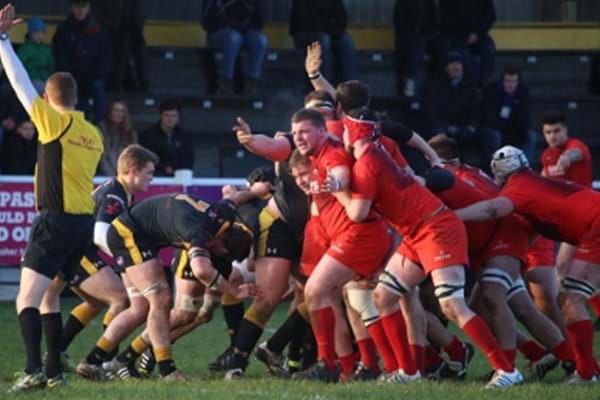