Hartpury produced their best performance since the big win at Richmond a month ago to maintain the challenge at the top of National League 1.

Whilst there is still substantial room for improvement in more than one area of their game, this was a match in which chances were created and in which the challenge from Coventry’s most potent weapon, a dominant scrum, was largely overcome.

Both sides had won their previous game, Hartpury in a nail-biter at Fylde and Coventry in altogether more comfortable circumstances against Loughborough. The visitors, though, have had a frustrating campaign in which momentum has been elusive and so it proved again.

It’s hardly worth commenting on the weather, which now appears to be a standard combination of grey skies, rain and blustery wind, other than to remark on a newly-laid playing surface that has held up remarkably well in this wettest of winters. Last year’s pitch would probably have been unplayable by now.

The team had also been refreshed. Mat Protheroe got a rare start at full-back, meaning that Jacob Perry moved to 10. Robbie Shaw saw a reward for his patience with a start at scrum half.

In the pack, George Evans was a straight swap for Rhys Oakley, who has been bothered by an elbow injury and James Voss was selected in the engine room after a number of good performances in the BUCS competition.

It was Shaw who eased the home side into an early lead. Coventry fumbled the kick off and, in trying to recover, were penalised under their goal-posts. Shaw slotted the kick and was on hand to repeat the dose seven minutes later, as the visitors were again caught out at breakdown.

The advantage was short-lived, however, as Hartpury were judged to have not rolled away at a ruck. Hodgson put a beautiful spiralling kick to within five metres of the home line and the driven line-out was efficiently executed, hooker Matt Price getting the final touch.

But it was the hosts who were dominating in most facets of the game. The back row was functioning well with Evans, Safe and Polledri all working hard and Steve Leonard was asking lots of questions in midfield.

Half backs Shaw and Perry kept Coventry pinned back with some well-judged kicking and it seemed likely that the breakthrough would come. Protheroe looked destined to score, but the pass to him was fired high and hot, while a good break from winger Mark Harrison was pulled back for a foot in touch.

It was not until the 33rd minute that the Coventry whitewash was finally crossed, and the visitors were the architects of their own downfall. Having won a scrum deep in their own 22, Coventry looked to work some extra space with drive from the base.

However, Number 8 Le Roux was hit with a good tackle from Will Safe and the ball spilled forward. Centre Luke Eves was quick to pounce and move the ball inside to Leonard. The finish was powerful and direct, his burst under the posts (pictured) leaving Shaw with the simplest of kicks.

Having shown their good side, the half ended with Hartpury looking less impressive. At least two tackles were missed as Coventry ran strongly in attack, leaving Hodgson with a finish from close range which he improved to make it 20-14 at the break.

As the weather closed in, the second half was a more scrappy and dogged affair. Hodgson slotted another penalty in the 47th minute but it was largely the hosts who were controlling play. Coventry were having to withstand some heavy pressure but a combination of good defence and some questionable decision-making kept Hartpury at bay.

Shaw was successful with two further kicks as Hartpury’s forwards stepped up the pressure, while the normally dependable Hodgson missed twice from kickable positions to keep the lid on any Coventry revival.

The game ended with Hartpury shunting a couple of Coventry scrums and they perhaps should have extended the margin as the forwards opted to keep it tight with the backs screaming for the ball.

In another late attack, lock James Voss, who had an otherwise excellent game, lost the ball in the act of scoring with the clock ticking down.

The hosts were, overall, good value for the win and will go into next weekend’s away fixture at fourth-placed Esher in good heart.

Results elsewhere went largely to form, although Blackheath were made to work hard by Henley and Richmond won by just a single point over Fylde. Esher had too much for Loughborough and DMP continued their hot form by beating Rosslyn Park.

Blaydon got a good win in their basement battle at Wharfedale, although Cinderford were outgunned by Ampthill. Plymouth’s good run hit the buffers as they went down at home to Ionians. 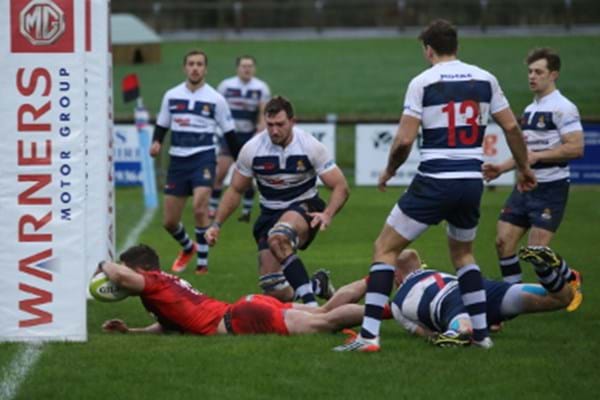