A late Lloyd Evans penalty was the only thing separating these teams at the end of an encounter that was every bit as tight as the scoreline suggests.

On a heavy pitch and with handling difficult, this was a day for character. Each side showed plenty, as they produced a game that was compelling and watchable despite an absence of the free-flowing, open rugby for which both clubs are known.

Hartpury came into the fixture needing to avoid a third defeat in four games whilst Fylde, who have been inconsistent all season, were looking to go unbeaten in three games for the first time in this campaign.

Following the disappointing home defeat to Plymouth Albion before Christmas, Hartpury made a number of changes. In the forwards, Mike Flook was recalled at loose-head and James Stephenson was available to start at hooker. Will Safe made a welcome return to the back row.

Jacob Perry was switched from fly-half to full-back, accommodating the return of Evans, and there was a first start for ex-Bristol and England Under-20 centre Luke Eves, recently acquired as a free agent. Mark Harrison made his first appearance since picking up an injury, playing against Fylde, back in September.

Lancashire has seen plenty of rain in recent weeks and it was to Fylde’s credit that they were able to produce a pitch that was well-grassed and certainly playable, despite being soft underfoot.

However the conditions and the greasy ball contributed to a pattern of play that was attritional and abrasive, rather than dynamic. In the first quarter, both teams opted to kick for field position and look to force the mistake, as attempts to move the ball proved unproductive.

It was Fylde who slipped up first, on the half hour. An unsympathetic pass was fizzed back to Jordan Dorrington, above head height, and his fumble was seized upon by mobile hooker Stephenson who drove towards the line. Quickly recycled ball allowed Hartpury to move it wide and Eves marked his debut with a simple finish.

On the stroke of half time, however, Fylde were in front. A penalty was kicked to the corner and although the initial drive was held up, number eight Dave Fairbrother was on hand to touch down as the home pack were able to re-establish momentum. Chris Johnson’s conversion was enough to give Fylde a lead at the break.

Hartpury started the second half brightly. The kicking was more purposeful, with Perry in particular putting in a couple of lovely touch-finders to establish attacking positions.

It was frustrating that the only reward for this period of dominance was a penalty from Evans, given after a Fylde scrum was demolished, and even that was quickly cancelled out when a high tackle, one of many called in the game, allowed Johnson to respond.

It was now Fylde’s turn to dominate the ball and Hartpury had to stay focused in defence, the forwards in particular, led by Joe Dancer and Will Safe, working hard around the fringes.

It was slightly against the run of play when, in the 57th minute, another long kick from Perry allowed the visitors to establish some good field position. After a number of phases in which they threatened the Fylde line, centre Eves was able to batter his way over for his second try of the match, converted by Evans.

With a little bit of daylight, could Hartpury ease away in the final quarter? The answer came quickly as flying Fylde winger Ollie Brennand was allowed to travel too far in his kick return and then, a couple of quick phases later, pop up on his wing to take advantage of a big overlap. Johnson’s excellent conversion from wide had the hosts back into a two-point lead.

Hartpury needed to dig deep. Previously they had come up short, despite a big final effort, against Plymouth but on this occasion they were not to be denied. Under pressure, Fylde began to leak penalties and, having missed a more difficult kick slightly earlier, Evans made no mistake when they were caught out under their own posts with only four minutes to play.

The College had the composure to ensure that Fylde did not lay hands on the ball for the remainder of the game and, in the end, were just about value for the win that keeps them in touch with Richmond and Blackheath at the top of National League One, with a home game against Coventry to come next Saturday.

Both London sides had convincing away wins, Richmond by 37-13 at Hull Ionians and Blackheath deepening the gloom in the Forest with a 37-5 scoreline.

In fact none of the sides fighting against relegation were able to record wins with Henley losing at home to DMP, Blaydon at home to Ampthill and Wharfedale at Esher, who stay 4th.

Plymouth Albion continued their good form with an impressive win at Rosslyn Park. Next week’s visitors, Coventry, enjoyed New Year with a 37-12 win at home to Loughborough.

We would like to thank Fylde for their warm hospitality and wish them well for the remainder of the season. 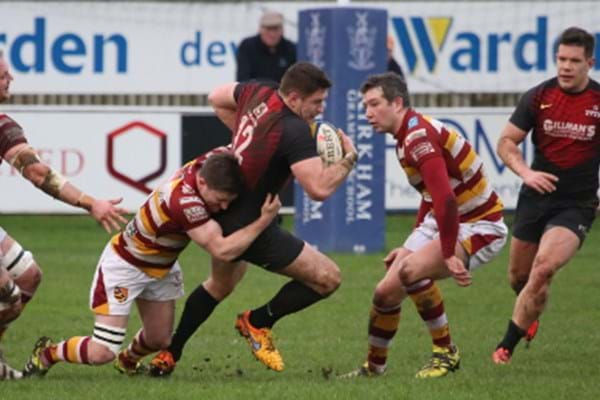