Hartpury looks set to have its first Oxbridge student with scientist and talented footballer, Nick Gallagher, having been offered a place at the University of Cambridge.

Nick, 18, from Bristol, is currently in his second year at Hartpury, studying A-levels in maths, biology, chemistry and physics.

The talented sportsman decided to come to the college from Queen Elizabeth Hospital School in Bristol as he wanted to continue developing his footballing talent alongside studying for the qualifications that could secure his dream university place.

Being part of the football programme has meant Nick has been able to benefit from top level coaching and play for Hartpury’s Under-18s teams while pursuing his academic ambitions.

“Hartpury has worked so hard to make my time-tabling work around my training and playing commitments so that I could keep up my football and stay on course to get the grades I need.

“It is hard work and can be pretty intense at times, but it’s all been worth it. It shows that you can still play top level college sport and go as far as you want to with your A-levels if you put the work in and have the right support.”

Nick has played a starring role for Hartpury off the field as well as on it, achieving two silver medals in the Royal Society of Chemistry’s annual Chemistry Olympiad during his time here.

“You do a lot of growing up here and I know that the fact I’ve already lived away from home and been at a college where you study alongside degree students will really help with the transition to university.” 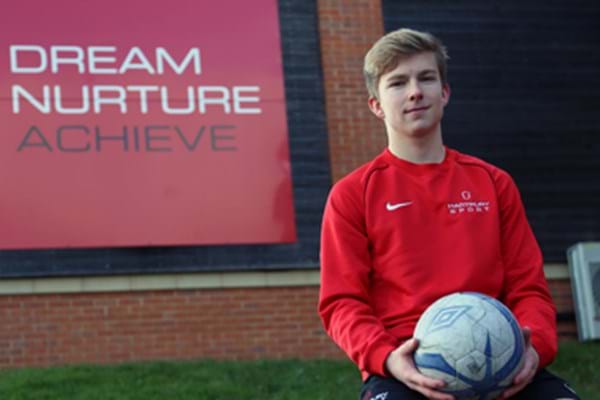